Shall we?
Several of the bitchitude faithful have asked for my thoughts on Rush Limbaugh’s latest verbal malfunction concerning Michelle Obama, her recent meal of short ribs, and her figure. 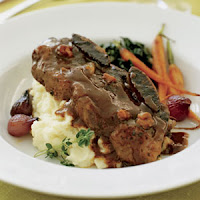 Lawd, I shudder to think what the rest of the world must think of us.
Wince.
On Limbaugh in general...the man is a rather typical loud mouthed bigot who is most likely covering up a lifetime of self-hate and insecurity by lashing out at all who make him hate himself and feel insecure.
The thing to keep in mind is that Limbaugh craves the criticism as much as he seeks the praise. He’s a lot like the Anonymouses who try to comment here and link back to some racist post because being a racist without inciting outrage is to fail at the ultimate goal of being a rancid racist. Limbaugh’s hustle demands that outrage…he’s only as popular with his base as he is despised by the rest of us.
Having said that, his crusade against Michelle Obama is a new low. I’d be concerned, but his listeners were already anti-Obama and his attacks serve only to make him look like a schoolyard bully.  For most people, this latest bullshit will come off as distasteful and serve only to enhance Michelle Obama’s popularity. Since it appears that the First Lady is dealing with Limbaugh’s public display of no home training with grace and intelligence, I’m betting that she knows that.
Pause…sip coffee…continue.
On the route some take to criticize Limbaugh…we need to check ourselves before we wreck ourselves.
Rush Limbaugh is a rancid knave…gleefully ignorant and stunningly crass…wretched in his lack of home training…
…but none of that is due to the size of his ass.
Catch thy knee!
I know and you know that I know that you know that it is hard as hell to listen to someone who is far from fine criticize how someone else looks.
But far too many people have taken a dive into the same toxic pool Limbaugh swims in.
This isn’t about taking the high road and giving Limbaugh a pass.
This is about taking the right road, leading by example, and critiquing the fool for his foolishness.
Or better yet, giving him the silence he fears…and letting his words hang in the air like a stankified fart in a humid room.
Damn it all, now I’m craving short ribs!
at February 24, 2011

Mmmm, short ribs. I can long for ribs much more safely than lusting after Mrs. Leader of the Free World, but truth? Both look quite yummy. Of course, you should gobble up only one with extra sauce and a nice cobbler. I will leave it up to the Reader to decide which....

he's a dick. That's about as succinct as I can put it.

Well said, and I absolutely agree. Having his hate-filled dribbles be ignored is the absolute best revenge -- "like a stankified fart in a humid room" indeed. Heh, heh.

And thanks for making me crave BBQ sauce again (wink)!

Sad as it is to say, this is not a new low for Rush Limbaugh. That would be the time on his (thankfully) short-lived evening talk show when he discussed the "new White House dog" and showed a picture of then-teenaged Chelsea Clinton.

I mean, it's one thing to call a grown woman fat (especially when one considers that Rush is not known for his chiseled abs), but to make cruel, politically-motivated jokes about a 14-year-old girl's appearance on national broadcast television.... that is assholery of the highest caliber.

You've touched on a couple very important points.
1. The Limbaughs, Becks, etc are sick people full of self loathing and incapable of compassion or kindness. I look upon them as being sick individuals.
2. More importantly, they are fueled by a system that is designed to raise your outrage. The angrier we are at them, the less likely we are to notice who really has their foot on our throats.
Right, left, those running the show could care less. What they want is for everybody to be focused on everybody else and not them as they press tighter and tighter on our throats.

I doubt that the Rushes of the world actually hate themselves at some level. I think that they just enjoy being bullies, and feel perfectly entitled to bully.

I happen to agree with much of the concept of "original sin" - not the let's-blame-Eve stuff or the emphasis on sex, but the observation that all people have the capacity to be selfish, malicious, etc.