Sarah Palin wrote an article and, among other things, said…

"And who will suffer the most when they ration care?" Palin asks. "The sick, the elderly, and the disabled, of course. The America I know and love is not one in which my parents or my baby with Down Syndrome will have to stand in front of Obama’s 'death panel' so his bureaucrats can decide, based on a subjective judgment of their 'level of productivity in society,' whether they are worthy of health care. Such a system is downright evil."

Jaelithe of MOMocrats has a fantabulous response up.

And this bitch has something to say too. 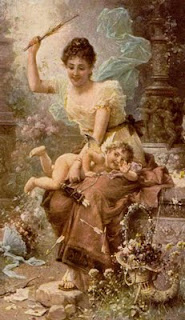 Sarah Palin is right – the sick, the elderly and the disabled suffer the most when the health care system is fucked up.

But she’s also the very definition of wrong – the current system is not working and, as a result, older Americans and people with developmental disabilities…and I’ll add the poor, who seem to be invisible to Palin and her minions…are suffering right now.

Contrary to the voices in Sarah’s head, she’s not the spokesperson for families with a loved one with special needs...mostly because she has failed to embrace reform of a health care insurance system that is currently failing children and people with special needs. While many of us have been trying to get insurance reform for children and people with autism spectrum disorder passed there has been a curious lack of input from the former Governor of Alaska, who speaks so well of being an advocate yet seems unwilling to actually advocate.

My older brother is autistic and I grew up watching my parents damn near bankrupt themselves providing basic therapies for him because insurance companies refused to cover a damn thing…and I don’t recall Sarah Palin proposing a damn thing to address that when she was the Republican Vice Presidential nominee (a speech is not a policy proposal) or since quitting her job as Governor of Alaska.

There has been a loud as hell silence from Palin on the need to include services for children and people with Down Syndrome or other developmental disabilities in health care reform…and then she drops this freakish bullshit on her Facebook page, sits back and waits for her followers to praise her maverickishness.

If she had a lick of sense she’d be ashamed of herself.

Well, I’ll be damned if Sarah Palin is gonna become some sort of demented voice of a community I’m part of so she can further her political career.

My Gawd, are there no rational conservatives left?

Because this debate could use them.

The health care debate could use the addition of a robust and sane opposition raising mentally stable questions about implementation, access and sustainability.

But I’m not hearing from those folks.

I hope to Gawd they are out there and are just being drowned out by fear mongering inaccurate “death panel” ads trying to freak seniors out, by former politicians trying to be relevant despite having relinquished the very political platform that could have allowed them to propose legislation to help protect the rights of children and adults with developmental disabilities…and by the mob, so riled up it has become deaf to reason and blind to the reality that the insurance industry regularly decides who is worthy of certain care and who isn’t without the threat of electoral correction every four or six years…without ever having to face the judgment of the people, because the people have been too fucking busy defending the status quo to take this precious opportunity to add people-focused reform to a health care insurance industry that is currently “downright evil.”

Let me be clear…my older brother is profoundly autistic and he is incapable of advocating on his own behalf to make sure he gets the health care he needs as a 39 year-old man.

And I, who would protect his life with my own, support health care reform.

For me, this debate is really between those that have healthcare and could give a shit if others have it..(the I got mine, fuck you group)

And those that want America to step up and provide for ALL American's regardless of income, color, station in life and pre-existing conditions.

I'm going through my checkbook register for last year right now (we're late in filing our taxes) and so far have come up with $3500 worth of medical bills we've paid out of pocket for our autistic son's psychiatry and therapy. And that's BEYOND what is covered by his medicaid waiver.

Sarah Palin, to me, stands for all that is wrong with this country -- the celebration of ignorance.

Some of the Republicans I've talked to are concerned that the resources for medical care are already so decimated that allowing the 'riffraff' access will make access more scarce for them.

Whereas I know people who have *broken limbs* and ODed on Tylenol until the pain went away because they couldn't afford to do otherwise. So I have a hard time not biting their heads off when this comes up.

I heard Rush Limbaugh spouting some dumbassery on the radio today.

Apparently we're getting closer and closer to "Nazi" Germany and their socialist practices. If I heard Nazi one more time in his rant that was devoted only to pairing health care with all of the bad things in the world, a character attack w/ no content...

...and then said that those who advocate for health care reform *are* closer to the Nazis.

When I read about Palin's latest idiocy (it took me a while, as I do try to ignore her as a matter of policy), I came straight over here because I knew it would be good. And it was. Thank you.

Thanks for the link. I am sick right now (I know, irony, right?) So I was feverish AND angry when I wrote that post, and I didn't know if it was any good. But I just had to say something. Had. To. Say. Something. About the evil of undermining people she claims to help with the very words she claims to be supportive.

I'm glad you hit on all the points I didn't.

With remarks like Palin's, along with all the other stuff from Limbaugh, Beck, Hannity, Boner and the rest, it is clear that Republicans are interested only in defeating any health care plan anybody proposes.

Therefore, the Democrats, who have 60 votes in the Senate, a 79 vote margin in the House and the White House need to agree among themselves what the plan should be, and pass the son-of-bitch.

To hell with the right-wingers. Obama has been nuts to ever think he could work with these guys. If they had the advantage, they'd ram through whatever they wanted.

Another ranting liberal who cannot seem to debate intelligently without dropping the f-bomb every other sentence.
Here's a tip: If you want to sound intelligent and want people to actually listen to you, drop the four letter words, get out the dictionary and READ! Increase your vocabulary.

Ah, another rancid conservative who inaccurately equates a person's use of so-called banned language with her lack of education.

In fact, "a robust and sane opposition" would be nice in general.

1. Little worried that there seems to be a cross-pollination of the concepts of Socialism, Fascism and Nazism. They are far from the same thing, yet are being used interchangeably. Oy.

3. Just to ask, why is ethanasia always a bad thing? There is dementia in my family... I have watched the long slow slide of elderly relatives and pray that I cling to enough wits during my own inevitable slide to pull the trigger at the correct moment.

Do you ever get so angry your ears get hot? Well...

My mother died from cancer (or rather from receiving bad health care) after her insurance company wouldn't pay for treatment they thought was too experimental, at a hospital not in their network. Who chooses these networks anyway? Is it like the NBA draft or something?
Since then, I have not only run into wall after wall trying to get adequate health coverage for my adult brother with autism, but have driven myself so crazy from the stress that I just finished a run at an eating disorder treatment center. (Bulimia, contrary to popular opinions, is not just a white girl thing. But that's a whole different rant.) Technically I didn't even finish the program, but my insurance cut me off. After all, it's an elective program for a psychological disorder, right? Either they help me get well now or soon it WILL be a necessary hospital stay for an esophageal hemorrage, but I digress.

I make a pretty decent living but have spent more on treatment for myself and my brother in the last few months than I bring home. Why aren't we seeing angry people with stories like mine televised at these town hall meetings? It seems to me like they are setting this system up to fail before it even starts by going to these tiny, homogenous, conservative communites and scaring the crap out of small minded people (who think gays shouldn't marry and Obama is a muslim), getting these folks riled up, and playing it repeatedly on primetime tv. (Whew... that was a rant and a half.)

Here's another bit of irony for ya: In March of this year, the federal gov't (HEW? - whoever handles Medicare) declared a moratorium in Alaska on adding any more Medicare assessments, as 227 people had died while waiting for their reassessment for home care. Another 27 (?) died while waiting for their assessment to be added to th rolls. Alaska is the ONLY state with this going on. Can we say "Death panel" anyone?

As for having people tell their stories about their health care "experience," at a recent town hall meeting, several people telling their stories were heckled unbelievably - one man battling cancer was told he was unAmerican (again, in Alaska - I read themudflats-dot-net)

How can you fight this kind of garbage, anyway? Just outlast 'em (via attrition maybe)? I don't know the answer, nor anyone who does, really. It's demoralizing, dangit.