…in the battle for the Stanley Cup! 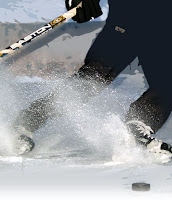 My bad, but June is a busy month.

The series has been great but the other night’s game demands a post, damn it!

Disclaimer #1– a bitch is in no way tossing out a dis to my good hockey loving friends in Detroit city and this post in no way indicates a bitch is rooting for Pittsburgh or against them or wants to get up in that shit. Sadly, this St. Louis bitch has no horse in the race (sob!!) and therefore is banned from aggressive trash talking.

Now, where was I?

Holy mother of old time hockey, the Red Wings were 35 seconds from bliss but those Penguins took the ice and said “Hold up and wait a minute!”

But three overtimes (legs like noodles...gasp!) later and the Penguins emerged victorious to skate another day.

You need to stop talking crazy! Next you'll say we ski...

True. Any hockey fan who doesn't know this is an idiot. Grant Fuhr, greatest goalie who ever lived... Jerome Iginla, possibly the best player of the past 10 years...?

You made me snort my vodka cran!!

I am black and love watching hockey. Wish I had known that there were black people who did it when I was younger (same with my boyfriend) so that I would have known it was a possibility.

There are actually a lot more black players in the league that most people think. A lot of them may not be considered black since some are from other nations.

Social justice, jazz, and hockey--you are all right!

I don't see much hockey any more, but as a Flyers fan since 1973 (when I was 6), I cannot show any respect for an Edmonton Oiler, no matter how great or groundbreaking. Blame that cherry-picker Gretzky.

Just so you know where I'm coming from...When the Soviet Red Army toured the U.S. and played the NY Islanders, I rooted for the Soviets--no question about it.

lol i love hockey too! but i've been so caught up w/the bball playoffs I didnt even know hockey was goin on...

Grant Fuhr, greatest goalie? Hmm... missing just a few others there but who's to quibble? He was really good.

As a dyed in the red-and-white-wool-sweater Red Wings fan, Monday nearly killed me (who says spectating isn't a cardio workout?) and I am fervently looking forward to tonight. I don't care if the Wings clinch the Cup on enemy ice - just please for the Love of Gordie WIN.

The Chicago Wolves are playing Game 3 of the Calder Cup tonight (away, thank heaven, or I would be having a crisis of existential proportions, as we have season tix and are huge Wolves fans, too) so I am blessed to have TWO horses in the race right now. Good kids, great season, and minor-league hockey is superb and affordable for anyone who wants to see a game live.

The Penguins goalie played out of his mind Monday night. He got a standing O from a houseful of Detroit fans with one of his saves - the Penguins are at the cusp of a dynasty if they can keep the team together.

Hockey is more addictive than crack (and no, I don't think the FBI is going to hand out free Center Ice packages in the 'hood) and I must confess to getting the Dearly Beloved well and truly hooked. She's gone from tolerating it on TV, to reluctantly accompanying me to the Wolves games, to her own Wolves paraphenalia and Wings gear, to screaming at the top of her lungs at the refs, to shrieking and jumping up and down at the television to demanding we get to the Wolves games an hour before the puck drops so she can "scout the opposition."

I love this time of year... Go Wolves, and Go Red Wings!

I was my friend Marshall who got me skiing and skating. He grew up in Pontiac, Dad from Mississippi, mom from New York. I now own skates and skis because of that Brutha'. I was his best man and I am the godfather to his kids. Lawd have mercy a Xicano atheist taking his kids to Baptist church...should something untimely happen.

I knew there was a reason I loved your blog. I just hope that tonight's game isn't so long. My fingernails are already gone and my husband's kidneys might fail if he drinks as much as he did Monday night again.