McCain in the news...

Senator McCain promises to fight evil if he is elected President of the United States of America. 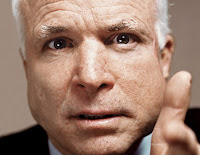 I don’t know about y’all, but this really got my speculation juices flowing. Not that the world won’t benefit from a serious effort to end human trafficking, religious persecution and child exploitation…because it would and it sure as shit should…but that bit about going to battle against unspecified general evil worries the hell out of this bitch.

One person’s evil is another person’s basic human right.

Proof that McCain’s definition of evil is probably not the same as a bitch’s definition can be found in his recent speeches, where he's been pandering to social conservatives with pledges that he’s on board with the same fucked up from the floor up good versus evil bullshit that got America into our current state of absolute fubar. 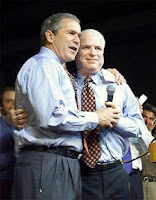 A bitch suspects that he’s trying to balance out his ‘I’ll appoint strict constructionist conservative judges’ overt anti-choice coded promise with some compassionate conservative meets ‘I’m trying to make the world a better place by remaking it in my image’ bullshit.

And with the addition of the word ‘evil’ McCain added yet piece of the Bush uniform to his wardrobe.

At this rate he’ll be mouthing off about hunting down the "evil doers" who hate our freedom and despise our traditional values over in [insert country/region next in line for a clusterfuck] so that we won’t have to fight them here just in time for the Republican invasion of Minneapolis in September.

Well, he seems to think he has hit on something. This shamelessness will keep things totally FuBar and I guess that's ok when all that matters is that you win, not really solve any problems. If the political goal was to solve problems we would not be in this mess. Can you say DELUDED? I hope people can see that this rhetoric is played out and tired and really require something more of the people they elect.

Incidentally, how bummed out are the Dems that this housing crisis and economic meltdown that the Rep let happen has fallen apart while they have a majority. Seems like Dems can't win for lose.

Don't you love it when conservatives talk about "evil"?

They love the word 'cause it's all purpose to them . . .
Evil and of course, UN-AMERICAN pretty much covers all the perceived strides a forward thinking and enlightened electorate will be charged with when the likes of McCain are through with us.

And wtf at "evils". That picture makes him look a little scary too.

Hi shark fu, just a quick hit to say I love your blog, and I was hoping you might be interested in contributing something to the upcoming edition of the Carnival of Sexual Freedom and Autonomy.

I thought about running for president with the slogan "Deliver Us From Evil". Then I realized that too many people would misinterpret it.

It never ceases to amaze me that what I think to be basic human rights and allow for our autonomy as individuals is interpreted as evil by the Republicans. It makes me ill and made me want to move to The Gay and Lesbian Kingdom of the Coral Sea Islands is located in Oceania. But, it seems, that government is no more committed than any other and seems to have collapsed.

It's old dog same tricks, but some people won't fall for it this time.