Y’all know that scene from The Matrix when Neo wakes up in the real world and realizes that he’s been living a simulation all of his life?

Yeah, that’s what I thought of when I watched news breaks that Scott McClellan’s book breaks ranks…BIG TIME…with Bushology.

But then I remembered that I like Neo, I was rooting for Neo in The Matrix and Scott McClellan is no Neo (wink).

He’s more like Raymond Shaw in the original Manchurian Candidate….unlikable, arrogant without justification and a general asshole who just happens to be under the spell of Angela Lansbury…umm, I mean post WWII Communists planning to take over the United States government.

So, Scott has written a book that apparently goes off on Bush and his minions.

Since there is no way in hell this bitch can buy Scott’s book (it goes against my religious convictions to support trifling minions trying to make a buck after fucking over the country by remaining silent since Texas out in the name of loyalty), this bitch is going to have to enjoy the fall out from a distance.

Bartlett added that insiders are “bewildered” and “puzzled” by allegations made in the book (now they know how a bitch felt watching Scott McClellan’s briefings).

The Bartlett added that insiders fell that McClellan has violated the trust of the President. "Part of the role of being a trust adviser is to honor that trust," said Bartlett. "It's not your place now to go out" and criticize the President like this.

I thought the role of a trusted advisor was to advise…or maybe that would have been too much like right. 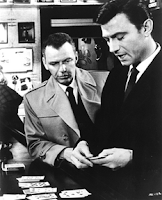 "Scott, we now know, is disgruntled about his experience at the White House," … "For those of us who fully supported him, before, during and after he was press secretary, we are puzzled. It is sad. This is not the Scott we knew."

ABB’s Current Interpretation of this Shit…
Mmmhmmm, they are soooo going to try to paint him as crazy!
at May 28, 2008

Yeah, I'm thinking it's time for popcorn, soda and The
Watch The White House TotallyTry To Dismantle a Traitor Show.
Should get high ratings for a day or two . . .

Yeah, it's a bit disingenuous to come out with these allegations now. Where was your conscience THEN, Mr McClellan?

Yes, where was his conscience? Not at the White House.

He talks about the lying propaganda to get us into a sorry war and Bush's stupidity of flying over New Orleans during Katrina. But he was a part of that propaganda machine. To keep his j.o.b., he said and did what he was told by Bush, Cheney and Rove, knowing he had the option to one day write a so-called tell-all book and rewrite history and thereby wash the blood from his hands. No respect for him.

Not a fan of the man...but..Bush was/is surrounded by YES men; so one gets out & becomes whistle blower?? Me wonders how many more will disassociate w/Bush when this is all over...cause they still have to go on afterwards??

hell, once you know about any conspiracy it's too late lol

and by the way, you are not a bitch

you are a goddess

I will not purchase his book either. I am reminded that George Tenet tried to clear his name too by writing a tell-all book..I call bullshit on Scotty's book too.

But yes, it is fun watching all the talking points being leveled by the remaining loyal Bushies! If I heard the word "puzzling" once I heard it fifteen times from these fuckwits yesterday that were tripping all over themselves to get on any news show they could to discredit Scotty-boy.

Krazy Karl took the gold by calling him a leftwing blogger! ;p

Shark Fu, you had to know that the Secret Service code name for the WH Press Secretary was "Matrix".
For me the interesting thing about this entire episode is the former press secretary chastising reporters for not being aggressive enough. Now that is rich!
Just remember the public library is your friend. Borrow the book.Your taxes have already paid for a copy.

These people really have no shame. He was the most inside of inside men. Lied cheated stole and now he wants to steal some more by taking people's money. May he rot in hell for all the people who have died in this senseless war because he was too much of a coward to speak up earlier. I don't even want to hear anything about these psychopaths who claim they were just trying to keep their jobs. They have KILLED PEOPLE. They should be tried as war criminals!

Actually Scottys' problems are more genetic than anything. His mother Carole Keaton-Strayhorn, 2 time comptroller for Texas and candidate for Governor, started out as a Democrat, turned Republican and then Independent when the party would not support her run for governor against Rick Perry.

He's just another one in a long line who have been there, done that, seen that, got the T-shirt, left and THEN got religion.

Add his name to the long list of Washington DC loosers. I willborrow the book from the library but I sure as hell will not put one penny in his pocket. Maybe Ann Coulter can go buy a few hundred thousand and send them as 'gifts'.

Could always take it out of the library.

The original Manchurian Candidate is one of my top 5 fav movies.

Poor Bush et al., must be shocking to have someone turn on them!

Yeah, the cynic in me says this is a cash-in and an attempt at re-branding, which seems to be all the rage as GOP insiders rush to distance themselves from the current administration's poison touch. But, in all fairness: whistle-blowers are by definition participants. They are in a position to reveal the inside dirt because they were right down there slopping around in the mud when it happened. And I do see some public value in the truth of the matter getting out. After all, liberals have been saying what McClellan was saying all along, to little effect. So having an insider confirm those views with specific details is not such a bad thing.

But yeah, I'm sure all the people who've died in this ill-considered war would have appreciated a little more forthrightness when it might have made a difference.