Yesterday a bitch and C-Money went to the St. Louis Blues Fan Festitude, followed by a pre-season game against the Dallas Stars. Fan Festitude was fantabulous…unfortunately the Blues lost to those darn Stars.

We put on our new Blues jerseys (C-Money sporting her T.J. Oshie jersey and this bitch giving props to my favorite Swede in skates, Patrik Berglund) and set forth to get our fan on.

Scott Trade Center was packed with fans…lots of folks running about trying to score autographs and such. C-Money was on a quest to get a picture and some one-on-one time with T. J. Oshie, so we quickly identified the best opportunity for that (the picture area, not to be confused with the autograph areas because there were no pictures allowed at the autograph sections and no autographs allowed at the picture station and…Lawd, have mercy!).

We scored Bernie Federko’s autograph at an autograph station…even though I really just wanted to say hey to Bernie (a bitch is old enough to remember when the Hall of Famer announcer laced up and took the ice as a beloved Blue).

And then we got in line for pictures.

C-Money was thrilled to learn that T.J. Oshie was one of the players enduring the photo hour along with a certain Erik Johnson of the bad taste in hats Johnsons. So we waited and chatted with other fans and waited some more and then the line began to move and we got closer and closer and oh, my gods we were next up…

…only to find Erik Johnson, not Mr. Oshie, the next Blue up in the que.

Not that there’s anything wrong with that, ‘cause he’s cool as hell.

But that didn’t prevent us from a moment of audible disappointment (wince) that I feel kind of bad for (my bad, Erik...love ya like cold fried chicken at 3 o'clock in the morning!). I wasn’t even disappointed for myself so much as for C-Money who is kind of fated to never get a picture with Oshie because she wants one so damn bad. 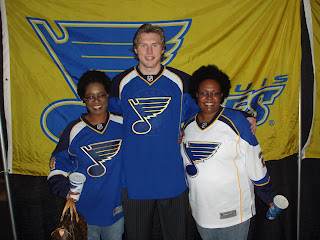 Anyhoo, we recovered and we took our picture with the charming and tall as hell Erik Johnson then went on our way.

For C-Money, the quest for Oshie shall continue.

In the meantime, C-Money and this bitch’s picture with Erik J. is on the Blues website under Fan Fest!

ABB, I enjoyed your Tyler Perry opine so much I had to share it with my group. The Black Think Tank (ttbt08.multiply.com) and they too enjoyed it (and still are) very much.

I hope you will pay us a visit with your wit style and TRUTH!

I appreciate your style and bluntness (candor has no place in reality). When I grow up, I wanna be just like you. Peace and keep on keeping us informed !!

Very fun night at Scottrade. It's great to see the excitement around the team.

A cheesy photo of me and T.J. will eventually join my office shrine. I'm going to put it next to the North Dakota bobblehead.

After that, my next quest will be to get Erik to bring back the fedora. He could make it work.

ABB, which one is u?

I'm the one in the white Berglund jersey.

Hi, I'm glad I'm not the only black bitch who loves hockey! Great pic with one of my fave young Americans playing pro hockey today. He was the number one pick, ladies :)

Nice jerseys, Sisters. Way to rock the Home Team! Went to the Blackhawks' preseason opener against the Capitals Saturday night. Even though they lost in OT I had the joy of introducing 8-year-old niece and 6-year-old nephew to the game, plus drag their Mom to her first ever. Niece loved the opportunity to shriek at the top of her lungs and the nephew asked some pretty doggone good questions... impressed and amused the guys sitting in front of us. It helped that their Dad and I bought them a round of beers to offset the niece's shrieking...

Remember - preseason doesn't count! I would be surprised if the Blues don't make the playoffs this year. Cheers!

Hi, ABB...you must be thrilled that the Blues beat the Wings today. I'm from Nova Scotia (home of Al MacInnis) and I wanted you to know that a national radio show here just selected the Blues as a team to watch this year. Though they are in a tough division, they are looking GOOD. (Esp. Erik Johnson in the pix! :-) BTW, great pix. Love Americans who love hockey. Go, Blues!