A bitch saw a news report on the worker sit-in at Republic Windows and Doors and…well, wow! The story is getting a lot of play and this bitch thinks this worker action is an example of the reality many workers face in these fubaristic economic times.

The workers were laid off with three days notice and no offer of severance or vacation pay. Their bosses blame Bank of America for not extending credit. Bank of America says that they are not responsible for Republic Windows and Doors responsibilities as an employer. And 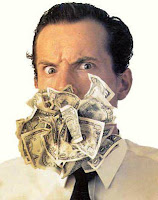 this bitch is thinking that this shit is exactly why most of us are fucking disgusted with the bailout epidemic currently breaking out in Washington.

And I don’t give a flying shit if some CEO is working for a $1 a year…show me that motherfucker’s complete compensation plan, which I suspects is oozing money.

And the workers of Republic Windows and Doors continue to occupy the space they labored in while their demands for economic justice are met with shrugs and denials of responsibility.

This reality…the worker’s reality…is what we need to consider as our government tosses billions at companies without so much as a “go fuck yourself!” to address the workers at those companies who will be left out in the cold when the money machine goes off line.

I'm with you. Folks offering to work for a $1 for a year means nothing when they are sitting on millions in resources. In fact it just makes me even madder to hear that sort of thing.

Ultimately I think the type of action these workers are taking is about to become the norm. Folks are fed up, we can bail out companies yet where is the justice for the little person?

Seriously. And if I hear/read one more holier-than-thou person of privilege say "Sucks to be them; those workers really oughta stop complaining and just find new jobs," I just might go postal...

You know, it seems like every news story I see about the auto industry bailout mentions auto worker's unions as one of the main causes of the industry's financial crisis. Makes me think that this is an unspoken reason the gov is treating them so differently than the banks -- they see an excellent opportunity to wipe out another still-breathing US union -- it's like a holiday bonus for capital.

Let's not forget the AT&T announcement last week. 12,000 people, some of whom live and work in St. Louis.

The law and their contract says they would get 60 days notice before being laid off. They got 3 days notice and none of the money they were owed.

And then ask what happened to their health ins., because even if they could COBRA their employers probably doesn't have a plan anymore for them to COBRA to.

There is a great movie called "The Take" about a similar series of worker-takeovers in Argentina, in reaction to neoliberalism. It was made by Naomi Klein and her partner. Check it out--I think our future is going to include a lot more of that.

I don't believe any of the lies that the FBI is spouting about Illinois Governor Rod Blagojevich selling Barack Obama's old Senate seat to a Republican for a hefthy chunk of change. This type of Simony is a Mortal Sin that no one in their right mind would commit. Surely Illinois Governor Rod Blagojevich would never sacrifice his Immortal Democrat Soul for 30 pieces of Silver. What is the World coming to?

Well, anyone can be bought...anyone...but I've watched too many hours of American Justice to jump to conclusions this early in the game.