And all that jazz…

Confession – the soundtrack for Chicago is still running through a bitch’s Afro in response to the Great Illinois Senate Auction of 2008. 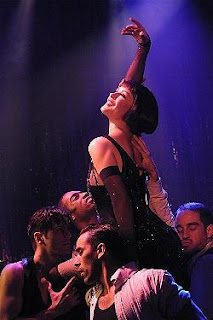 Anyhoo, this bitch caught the tail end of a news report on Big Rod’s big drama that mentioned a certain Candidate #5 of the numerous candidates vying for the open Senate seat in Illinois. Allegedly Candidate #5’s emissaries said they could raise up to a solid million for Big Rod…mayhap for his own Senate run…and that they were willing to give the Governor something tangible upfront.

A bitch is obsessing!

It's just a noisy hall
Where there's a nightly brawl!

Who are these emissaries?

What tangible thing were they willing to offer up?

Lawd, this hot mess of a political scandal is going to take a lot of people down…hard, face down and onto cold concrete.

Yeah, "Chicago"! The song I thought of (in the show, but cut from the movie) was "Whatever happened to class?"

I was waiting all day yesterday for you to weigh in on this. I'm just glad that somebody else is obsessing over this as much as I am.

I also have a mental list of people that I would LOVE to hit the concrete. This is going to get really god.

I’m not shocked, but I have to say that Chicago politicking makes me long for the relatively sun-ripened-plucked-fresh-from-the-vine wholesomeness of the NYC politics that I grew up with.

I thought that you might enjoy this David Mamet-inspired repurposing of the federal wiretaps from Salon.

Absolutely hilarious. In a demented, cynical kind of way…(sigh).

1) The Chicago Sun-Times has a fantastic breakdown of the criminal complaint on its web site. Plus our local PBS station had an hour-long program last night devoted to the news (the Dearly Beloved and I had the popcorn ready for that one).

2) Reporting from the front lines (as it were) - as Roddy insists on living in his house in Chicago and not the Gov's mansion in Springfield, he is my neighbor. No really - two blocks away. Every night I walk my dogs past his house and wave at his security detail.... last night I took our usual route and have never seen so many neighbors out walking their dogs on "our" route. I called the DB to tell her - her response was "yeah, Channel 9 just got a terrific shot of Larry (a yellow Lab) taking a shit on the governor's lawn."

Let's see - CBS had two trucks, NBC had one, ABC had two, Fox had three trucks, WGN had two trucks, even Telemundo was there. Plus all these little vignettes set up with the camera on tripod and the light bell, aligned for a clear shot to the Gov's front door, so each Talking Head would have an unencumbered "Bob, I am standing in front of the Governor's House in Ravenswood, where..." shot ready to roll. It was surreal.

This morning's first thought when I stepped out my back door to go to work and heard a bunch of helicopters nearby was "Oh God, he's grabbed an AK-47, gone even further around the bend, and has hostages." Unreal!

The sun times names Jesse Jackson Jr. as candidate #5. say it ain't so!

I am sad this morning. The news this morning that candidate #5 is JJJ just blows me away. :(

Matt yeah, MSNBC is all over it--Jesse Jackson Jr, it is traveling like wildfire. Yeesh!

I hope it isn't true that JJJr actually offered cash. This shit is crazy, and the governor is an idiot. Steven Colbert had a great line about that, noting that the gov's facebook status read, "Rod is... taking bribes."

"Lawd, this hot mess of a political scandal is going to take a lot of people down…hard, face down and onto cold concrete."


u sho got that right!

If Tre J did induldge - it shows what it takes to get put on like bonita applebaum.

They've started falling already. Bob Greenlee, a top deputy to Blagojevich, resigned today without explanation. Two of Blagojevich's top deputies are listed in the complaint. Greenlee is probably one of the deputies.

On one hand, I don't think Blagojevich will resign. I think he'll do the same as former Mayor Kwame Kilpartick and try to stay in office to earn an income and raise money for his defense.

On the other hand, Patrick Fitzgerald is the US Attorney in charge of this investigation. Fitzgerald investigated the Valerie Plame leaks. He busted Karl Rove, Richard Armitage, made a NY Times reporter go to jail for a couple of months, and he forced Scooter Libby to resign as chief of staff to Dick Cheney.

Fitzgerald does not play around--he's fearless. And he may force Blagojevich to leave office in the next couple of weeks.

The only thing funnier than this fiasco is Condi Rice saying that she is proud of all that the Bush Administration accomplished while in office. What did they accomplish? I love this govenor. He has made me laugh so much with this idiocy. What a complete idiot.