A bitch didn’t get to see the game, but I heard it was some serious hockey.

As a Blues fan, a bitch knows the agony of the d-word…sob…so my heart goes out to Wings fans all over the world. 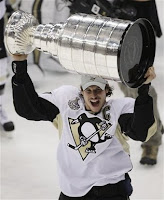 But don’t get used to that shit…’cause a bitch is all about rooting against the Red Wings and the Penguins most of the time! ‘Tis the natural hockey-based order of things…like arguing over which city makes the best pizza and despising the Blackhawks (wink).

Anyhoo, congrats to the Penguins and their fans. A bitch shall watch the cute videos of Lord Stanley’s Cup as it travels the globe and is used as an ice cream dish…

…and I’ll dream the dream of a crazy Blues fan – that our boys will be eating frozen custard out of that cup same time next year.

***logs off to gaze longingly at packages for Blues trip to Sweden (vodka + hockey + Sweden = fantabulous and totally unaffordable)***
at June 15, 2009

Yo. Love the bitch and all she say and do. Just keep shining, I'll be reading, and that's not a threat.

Glad they won. It's always nice to see the Red Wings losing. It was especially nice sine it was a rerun of last season. I presume that Detroit thought they would have it again, but not so.

From a diehard Blue Puckhead:

Four words about our beloved Bluenote:

I'm getting back to work now ;)