Faithful readers know that this bitch is a hockey fan. Last year, a bitch had to watch other teams move on through the playoffs while my beloved Blues stayed home having failed to make the cut. 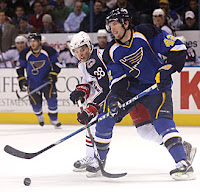 slot…but they sure as hell are fighting like hell to get that shit secured!

Last night this bitch watched David Backes (#42) get his highlight reel on with four…maybe five, but if he ain’t bitching a bitch ain’t gonna…goals!

And the Blues beat the Red Wings and redeemed themselves from the serious sin of losing to the Blackhawks the night before!!

This bitch knows that it ain’t over until ‘tis over…but my Blues are playing it out with heart and some strategic whoop ass and it doesn’t get any better than that.

I fucking LOVE this game!

It's seriously so much fun, isn't it? Blues hockey is the only mainstay in my life since I was 8 years old.

The games are shaving years off my life, though. Which reminds me of a quote from Glenn Hall, I believe: "I love everything about hockey, except for the game."

He he he he.... ah, yes. I look forward to the rematch if the Blues fight their way into the playoffs. Would love love love to see them hang on (heck - oust Anaheim for the 7 spot, they're only a point back) and St.L has what should be one of the easiest paths left. Dallas, Phx, and Colorado are toast - only the Blue Jackets will have motivation and Columbus' schedule shows they don't have an "easy" game left. Nashville is fighting for its life; the BlackHawks will be desparate to keep the 4th spot.... and Minnesota is never an easy game no matter where they are in the standings!

Content in my Red Wings (for now - prefer top seed but will take 2nd - San Jose has a very smooth path right now) I am now frantically rooting for the Blackhawks to hang on to that 4th spot. Scored 1st round playoff tickets. 1st set of home games. Anxious now, as if they start on the road I may be out of town at a "no you can't call in sick!" 3-day conference in San-freakin-Diego for their two home games. NOT IN MY HAPPY PLACE about that.

(logs off humming "It's the Most Wonderful Time of the Year" with hockey-appropriate lyrics in place of Christmas ones.)

Rebecca...great quote and too true!

Rileysdtr...I can't remember things being this tight before, but is sure as shit is exciting.

All together now - The most wonderful time of the YEAR!!!

Always good to have joy in your life. I'm linking this, and I'm not a hockey fan. (There were only 6 teams in my youth--Chicago, Detroit, New York, Boston, Toronto, Montréal.)

I grew up as a Flyers fan in southern NJ. I was 6 when they won their first Stanley Cup and 7 when they won their last. When the Soviet Red Army and Wings teams toured the US to play NHL teams, my eight-year-old self rooted for them over the Rangers and the Islanders. There's patriotism--and then there's hockey.

well well, miss shark-fu is a hockey fan?! i gotta tell ya, abb has been moved up in the bookmarks of this bitch's (do you mind if i call myself that? ok.) laptop and might even make it into the bookmarks on the phone for that! i was a fan before but now i'm a bigger fan! thank you for spreading the love!