The war on salt… 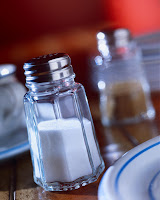 A bitch has been on the front lines of the war on salt for a few years now.

I’ll confess that I didn’t give a shit about the war on salt until my ass was diagnosed with high blood pressure.

Pause…sip coffee and do happy joy coffee dance in my head…continue.

Okay, okay…I still didn’t care about the war on salt even after I was diagnosed with high blood pressure.  My caring began after I started taking my blood pressure meds and realized that when they list frequent urination as a side effect they mean the hell out of that…they are serious…a bitch was peeing every half hour and that ain’t a recipe for happiness or joy!

All that pee made a bitch go back to my doctor and ask her what I needed to do to control my blood pressure without meds.

Anyhoo, I’ve been at war with salt since the post meds peeing began.

All I know is that the best way I’ve found to control my salt intake has been to cook my own food…and read labels.

So far so good.

I’m not off the blood pressure meds yet but my doctor reduced the dosage so I’m not peeing as much and that is a very good thing!

But the war on salt continues!

Something tells me that food manufacturers aren’t going to change a damn thing until the masses join this war and change becomes a factor in their profit margins.

As my beloved father used to say, money talks and bullshit walks…
at April 22, 2010

Slightly off-topic but diuretics aren't the only way to control hypertension. I take Olmetec:

Which works on the smooth muscles of the arteries instead. Relaxes them, which reduces the blood pressure. No peeing :)

Not that lower salt would not be a good thing in itself. It's largely added to make cheap food taster better, and that could be achieved by using better quality food in the first place.

Damn, you've just found my Achilles heel. Salt is my vice; I can't seem to get enough. My own mother suggested a I get my very own salt lick for the kitchen. Needless to say, my doctor disagreed. While I've not been diagnosed with high blood pressure, I've been experiencing the water retention factor of too much salt consumption. I can only say, blech. It's also a pain in my ass to have to check each and every label but I'm making the effort and share you pain.

But, Shark-Fu, does this mean you don't want the bottle of fine Ky Bourbon I have procured for you?

I'm taking quinipril. I don't frequently urinate but I am one of the "lucky" few who have the side effect of a dry cough. I haven't cracked a rib yet (because of the cough) but sometimes I wonder when it is going to happen.

Kelley...
Of course I want it! KY Bourbon is a sometimes drink (wink)...

I don't have high blood pressure but enough people in my family have it to make me careful.

When I buy tomatoes or bouillon etc., I get the no salt added version. I figure you can always add a little salt or herbs.

I also avoid eating out. I'm just shocked by how much sodium is in a lot of fast food.

I have discovered that I now feel the same way about salt that I do about all of the other sub-brilliant behavior that led to me having a stroke two years ago yesterday: I don't like it anymore. When I was in acute rehab for the stroke, one of my therapists asked me if I missed the vices I had given up and I told her:
"Sure I do, but not as much as the chunk of my brain they cost me..."
So my advice is hang tough on the salt. It may be a pain in the ass, but it beats the holy hell out of the alternative.

I find that in general, I feel better if I cook my own food. I'm looking at a genetic mix that includes all the big ones: hypertension, diabetes, and kidney disease.. (oh and heart disease too just for fun.) Cutting the salt is kind of necessary but difficult.