Get thee behind me, Rummy!

Rummy is back on the scene with a memoir set to be published in 2010. 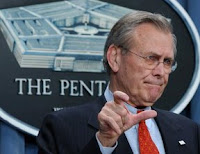 I know exactly what to do.

ABB, whilst flinging drops of vodka cran at Rumsfeld: I cast you out, unclean foulness! 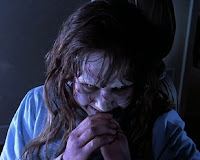 Rummy: Freedom's untidy, and free people are free to make mistakes and commit crimes and do bad things.
ABB: In the name of all that is logical, thought out or even slightly planned! The power of Spock commands you!
Rummy: As you know, you go to war with the army you have, not the army you might want or wish to have at a later time.
ABB: Be gone rancid beast!

Lawd, where’s Dante’s Eighth Circle of hell when you need to cast someone into it?
at April 14, 2008

Rummy's not worth good vodka cran. Use the really nasty cheap stuff; as a side benefit, it'll sting more.

It baffles me that people write autobigraphies, it seems so narcisistic and arrogant.

What jeem said . Old Swillwaukee Light , or similar would be better . Maybe close your eyes and use an unknown liquid? ;)

It reminds me of George a Romero. Not your writing. Just Rummie.

wait for screams of horror to quiet down I'm still laughing at that.

i needed to read this today.

i second jeem...get the stuff in the large plastic bottle.

Vodka cran? Oh, please. Use the only liquid a conservative truly fears: chardonnay...

Yep, pure vanity. Rummy sure doesn't need the money, what with all he made on those bird flu vaccines. Oh, wait. . .

You left out the part where the Rummy mumbles, "Stuff happens" as he levitates off the bed while his head is twisting around, spewing green pea soup AND he throws an innocent bystander, some unsuspecting Army Reservist, out the third story window. He is sooooo missed.

I heard Rummy is going to write a book... maybe re-write history?

You certainly have him pegged!

'whilst flinging drops of vodka cran at Rumsfeld'
oh, crap, I can't catch my breath.