I watched Oprah’s interview with Lance Armstrong last night.  Well, I watched it until Scandal came on and then dissed his ass for my current television addiction.  I have no shame and I prefer fictional drama to real world bullshit.

Lance Armstrong confessed to doping…and lying…and bullying folk who tried to come clean about all that shit.

But I’m not all that interested in Lance Armstrong’s admission.

I’m far more interested in the reaction of regular folk.

As a sports fan, I’m disturbed by the use of banned substances.  Armstrong explained that he didn’t think he was cheating because he didn’t feel that he was gaining an unfair advantage on his opponents since (in his opinion) they all used banned substances too.  But what Armstrong conveniently overlooks it that the sport of cycling existed before him…and his “wins” are measured against those of athletes who sure as shit didn’t cheat. 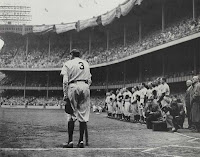 That truth is felt most strongly in the sport of baseball.  Doped up assholes have “broken” records set before performance enhancing drugs where even a rumor.  And baseball is a sport of statistic and records.  I find it particularly weak that baseball players celebrated breaking a record set by athletes who didn’t have personal trainers or medically enhanced diets…people who accomplished amazing things on the field with guts, skill, and determination.  It says a lot about a person…it really does…if they can knowingly hit a mark through enhancement that [insert baseball legend here] set despite the lack of modern technology.

As I said, I’m far more interested in the reaction of regular folk.

I’ve heard far too many people say that this shit isn’t a big deal.

And then those dismissive people follow that up with the same excuse Armstrong gives…that everyone does it.

Lance Armstrong and all the other doped up cyclist took the sport of cycling and turned it into WWF on a bike.

And what was once an opportunity to cheer personal achievement…to witness athletes battle their limitations and insecurities to achieve victory or concede in defeat…has been exposed to be an inside joke.

Fans have been punked and it seems that sits just fine with many of them.

Pre-doped achievements and records be damned.

We’re in the “but every body does it” era now.

Mayhap they’ll start including a list of each athletes favorite performance enhancing drugs on their collectable cards!

Huh. The only reaction I've heard from anyone was the conversation I had with the teachers at my kids' preschool this morning when I dropped them off. The teachers are *appalled*. They kept going on about how he didn't say he was sorry. He admitted this, he admitted that, but was he sorry? Naw.

Myself, I'm not so concerned, because what would an apology do to help at this point? It would just be more empty words.

He didn't have to cheat -- he wouldn't've been able to compete, sure, but nobody forced him to become a cyclist, you know? And he sure as shit didn't have to bully, lie, and sell out his competitors.

Ugh, Lance Armstrong! A chemically enhanced jerk with an over-sized ego. He was an a*hole before he took performance enhancing drugs; these drugs seem to enhance a*hole behaviors along with performance.

As far a baseball goes, Aaron and Maris are still the record holders in my book. Eff Bonds, McGuire, Sosa, and all the rest of the steroid CHEATERS!

Actually a lot of baseball Greats took PEDs - they just weren't banned back in the day. And there are quite a few open-secret hall of fame cheaters, like pitchers who would use a ring to scuff up the ball to get a better spin - which absolutely was against the rules. So it's not so black and white (except, of course, that Historical White Cheaters were lovable scamps, while just-an-example-at-total-random Barry Bonds is an awful beyond-the-pale cheater. Pun intended.).

It's like Ralph Keyes said in his book "The Post-Truth Era"--"I think it's fair to say that honesty is on the ropes." His point is that dishonesty has become so common, we expect it and can't even get that excited about it anymore.

Doped up assholes have “broken” records set before performance enhancing drugs where even a rumor.

Ballplayers have been using amphetimines for decades; in the '60's, they kept jars of "greenies" in clubhouses. It wasn't until 2006 that they were officially banned. PED's aren't new, they're just better than they used to be.

It's easy to just blame the players, but what about the owners and officials who knew damn well what was going on, but turned a blind eye because the Sosa/McGuire race put butts in seats and brought people back after the 1994 strike? They pushed the home run as the way to make baseball "exciting"--remember "Chicks dig the long ball"? Even I have to admit that watching the Panda get those three home runs in Game 1 of the World Series was awesome, and I love me a good pitching duel.

I don't agree with Curt Schilling on much, but I think he was probably spot on when he said that "Everyone was either doing it, or knew that people were and didn't say anything."

I also think that the game evolves, and it's not the same now as it was in the '90's. Look at the 2012 World Series, where the NL team that hit the fewest home runs in their home park beat the AL team known for its lineup of power hitters. AT&T Park, the House That Bonds Built, designed so that his homers over the right field wall would splash into the Bay, has become one of the most notorious pitchers' parks in the game. Power hitters don't want to come to SF because their numbers will tank in the park where home runs go to die...and so the Giants rely on pitching and small ball, and win. Everything comes around eventually.

Words to live by, Shark-Fu.

When they put up a statue of you in St. Louis (perhaps by the Old Courthouse, where Dred Scott's case was heard?), they ought to carve those words into the base.

I remembered being somewhat uneasy watching it when it first aired, but couldn't pin down what exactly bothered me. With 20/20 hindsight, the Bauhaus motto applies. Art is not a mirror. Art is a hammer that shatters illusion.

PED's are as old as sports, particularly pro sports. In cycling, use of amphetamines goes back to at least the 1950's, same with baseball. I guarantee that every Tour De France winner since 1991 has used EPO...really, anyone in the top half of the peloton. Jaques Anquetil, the first 5 time winner, openly admitted while he was still racing that he used PED's, he practically bragged about it.

I think the real scandal is football. everybody is ignoring the rapidly increasing size of football players, most of whom will die in their 50's as a result.
If any less than 90% of linemen and linebackers are using PEDS I'd be shocked. The PED usage at skill positions is probably almost as high. But everyone would rather beat up on cycling rather than look at what's in front of their noses every Sunday afternoon.

So, personally, I don't give a crap what Armstrong did or did not do. He just did it better than the other cheaters.

I am a former athlete and from the beginning I knew he was cheating. That sport is an impossible one and to win 7 times is an impossible feat. It was one of those things that was too good to be true. I have not liked him from the beginning because it seemed as though he was one who would intimidate others. He always struck me as a bully who was trying hard to be nice when interviewed. I am glad he was finally caught, it made me crazy that he was out there bragging when he knew he had cheated. I am pissed at the media for how they are treating this. They are wanting us to be sympathetic towards him. I will not be he made his bed he must lie in it.

And why do they all do it? Cuz we all keep buying it...they are just a reflection of us, IMHO, that is.