You’d have to live under a rock to have missed last week’s news that President Obama has evolved to the enlightened level of personally supporting same-sex marriage.

While I’ve been hoping his evolution would swiftly take him to the level above support that my people call policy (cue crickets), I’ve also been waiting to see which news outlet would violently shit the bed on this story. 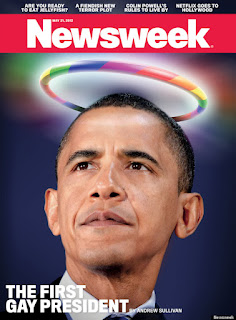 The prize goes to Newsweek.

Let me be clear…Newsweek won gold for the cover alone.

Here’s the thing – Obama’s announcement of his personal evolution to support same-sex marriage does not make him gay…or even a solid supporter of LGBT equality…and it sure as shit doesn’t make him the first gay president.

Sorry, Newsweek…but that shit works my last nerve just like people calling Bill Clinton’s ass the first black president because of his alleged support of policies beneficial to black people.

Advocating for equality rights for a group does not make a person of that group.

If President Obama comes out in June then y’all can plaster the cover with rainbows all you want.

But…yeah, um…supporting same-sex marriage does not make a person gay.

I find the Newsweek cover particularly troubling given this culture’s tendency to label anyone saying anything positive toward LGBT people as LGBT so they can then turn around and bully that person for being LGBT.

Now will come the defense that Andrew Sullivan wrote the Newsweek article…so a gay man wrote the article…and blah, blah, followed by blah…and I don’t get a shit.

Thank you. I had as much a problem with that aspect as with the halo thing. Anointing Obama (or any other human) as deity (of any stripe) is just, well, for lack of a more lucid word at the moment, icky.

Is this their sorry attempt to keep up with Time? Pathetic on so many levels but relevant bc I'm always telling my elementary school aged kiddos that being an ally can be hard work.

“gay is the new black”…
Lovely ABB, many have been trying to say that for the last 5 years. It's just that the "Black Elites" or HNIC of the usual orgs. and churches usually shout that down. Or someone else gets in a snit and does the "black is by birth, gay is by choice" chant.

It seems James Buchanan was the first gay president. Being that he was, like, in a relationship with a man and when it ended he lamented that he might be forever alone, and have to settle for marrying a woman, provided she didn't expect any husbandly duties from him.

He was also the first emo president, it seems