Okay, so this bitch had a serious giggle this morning.

Matt Lauer of the Today Show was in typical uptight form. He said something about the Rock & Roll Hall of Fame induction ceremony and the Sex Pistols and how they sent a letter of extreme bitchitude in response to being inducted...and how that was 'weird'.

He was talking about the Sex Pistols, right?

Anyhoo, this bitch had a quick mental picture of Johnny Rotten materializing on set and Matt pissing himself in horror.

Color me 'weird', but it made a bitch giggle.

The pot talking trash about that kettle again…
For several years America has been caught up in a culture war. The major problem is that people, regardless of where they stand, have been insisting that everyone do as they do…which isn’t very American.

This bitch wishes everyone would just shut the fuck up, go do as they want to do and stop trying to dominate others. 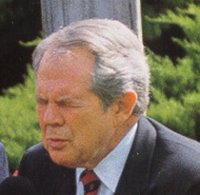 Which brings us to the word dominate…and the pot talking trash about that kettle again.

A certain asshole is being an asshole again. And a bitch isn't holding my breath in hopes that Senator Frist will admonish him for damaging our international reputation and emboldening our enemies. That would be too much like right, chil'ren.

Pat Robertson is himself possessed by a demon!

Think about it...this explains everything.

The evidence...
Pat Robertson is so clearly possessed by some sort of fiendish

devilesque thing, chil’ren...a bitch can't believe my ass missed it. His eyes are red, glow in the dark and he now speaks crazy talk in reverse like a chant. He’s like that child in The Exorcist…rotting from within…slowly becoming a foul smelling green vomit spewing nastified mound of flesh!

Lawd, a bitch can smell him all the way in Missouri! 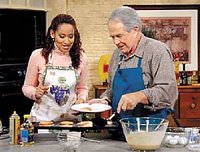 Robertson? He’s just that pot talking trash about how that kettle is doing what he has wet dreams about doing every night.

What I find thoroughly amazing is that anyone puts any credence into what Robertson has to say. If it's not a lightning bolt that's going to get him... perhaps one of those "Crazed Lunatics" will put a fatwah out... cuz yanno... they're crazy like that.

(Will someone tell me how to hyperlink in comments? I don't have a clue)

Also... whenever I see that ol' pinched up picture of Robertson, I think to myself that he's trying to pinch back a turtlehead...

Pat Robertson is one of those people who make me cringe when he uses the word "Christian". I may be a Jew Princess, but I do know enough that christian is not necessarily a religion, so much as it is a lifestyle. As I Jewish woman, I perform acts of Christianity every day through kindness, through volunteer work, through charity and for living a pure existence. I try to stay good at heart...the ideals on which Christianity should be founded. Where in the book of the Lord, ANY Lord, does it say to call any one sect of human beings "maniacs" or "radicals"? My husband is from the Middle East, albeit Israel, but the middle east just the same. He knows that all Palestinians aren't monsters. He knows that all Muslims aren't full of hatred in their hearts, and he grew up in the shadow of that hatred! I think Patty boy needs to be locked up in a dark cellar somewhere and forced to watch Mary Poppins over and over and over again...until he becomes a kinder person.

I suspect the tape would break from overuse before that would happen.

Does ABB Believe in God? Is she as fine on the inside as she is on the outside?

I think Pat Roberts believes in himself more than God. Unfortunately he has become a national embarrassment. Apparently he feels that he speaks for Christians. There is overwhelming evidence that he does not. He speaks for himself and maybe Fred Phelps of Topeka. One wonders if he actually thinks that he speaks for God? Well, they say, God watches out for the fools.

He is a true nutcase and a disgrace to religion of any kind.

epiphanies are wonderful things. i think he might indeed be possessed.

My best friend is Palestinian and has seen more people killed in the name of extremism than from any religion... Fundies are fundies as far as I'm concerned, and Robertson has a lot more in common with a suicide bomber than with any Christian who possesses an ounce of common sense.

I like the demonic explanation better. I read yesterday that The Bible says the "Even demons can quote the scripture"...of course the exception is that what includes the Lord's name.

ABB, first all I could hear in my head all day yesterday was Chloe Webb saying "SIDNEY!" after reading about the Sex Pistols...funny.

About Pat Robertson...my general feeling has always been that religion is for those people who really need to be told how to behave. I mean, if you need to be told not to Murder, Rape, Take someone's shit, or Love, by all means...find your "Gawd" and your religion.

For those of us who realize the good and bad in everything and choose to do good for ourselves, I say screw religion and screw religion's "Talking Heads" like Pat Robertson.

We're better than that. I mean REALLY!

By the way, have you taken part in the Anti-Pat Robertson-supported CITGO Boycott BUYCOTT? Damn thos 'american family association' bastards!

Oh honey, that picture of Patty Boy, his puffy face all pinched and crinkled with strain -- he's not possessed; the fucker is constipated!

Someone get him a Metamucil milkshake, stat.