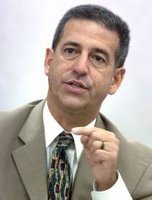 Russ made a strong case, but a bitch was more interested in the current 2008 GOP frontrunner, Senator Frist, and what he had to say in reaction. Billy…we’re not close, but a bitch plans to get to know him way better now that he’s decided to make a run for it (wink) …seems to think that the enemies of America would be emboldened by Senator Feingold’s call for censure.

A bitch has always been confused by this way of thinking.

If Iraq thinks that we are full of shit, calling out of the President for being a crook may make them feel validated. But they probably won’t grow to dig America’s chili simply because we ‘show a united front’ and ‘stand behind the President’.

What Billy Frist and his conservative homeboys are missing is the positive spin we can put on this censure in the Middle East!

See, the last decade of American politics has been confusing as a motherfucker. The recounts, election fraud, willingness of elected officials to lie to the public and corruption scandals fly in the face of our current democracy marketing campaign. Advertising may get folks into the store, but a shitty product will have them turning right around and cursing your name on top of it.

But now we all have a chance to demonstrate democracy in action. Yeah! Imagine the print story y’all could plant in the Iraqi newspapers covering this shit…

Today President Bush was censured for willfully ignoring the law of the land and authorizing the illegal wire-taping of American citizens without a warrant or legal review. In America, the citizens have rights and those rights are upheld by the law of the land. No one citizen is above the law of the land…including their President. Congress writes the laws and censured the President for violating his oath of office and his responsibility to preserve and protect the Constitution of the United States of America. This is a demonstration of democracy honoring no elected titles and checks & balances in action!

Oh my, this is a huge opportunity for a wee little international lesson in American civics!

Talk about shock and awe (wink).

I heard the censure rumor, and I also heard an Impeachment rumor too. And scooters stats don't look so good, so wouldn't it be good to strike now while the people of the U.S. are a little angry, a tsunami begins with a little ripple. I'd like to see the entire administration out of office.

But that will never happen, and as of last night they say Iraq is totally headed for a civil war, that may destabilize anything the U.S. has done or will do in the future.

In any way shape or form scooter is F*cked....

Basically, I think you're brilliant.

LOVE the portrait of scooter. Where on earth did you unearth it? It's so.... HIM!

They ran another impeachment ad in the SF Chronicle on Saturday. But that's like the good reverend preaching to the choir. They need to put their ads in Red State papers....

And like you, ABB, as much as I do personally to change the way American politics works, I realize that just a handful of us Activists can't change it without help. I'm getting sick and tired of America's piss and moan political passivism (and I'm glad you encourage others to be active as well).

Rant over....didn't mean to jump on your soapbox, especially since I have one of my own....

Damn sis, great post! Wish I had written it on my dubya is ignorant site.

It's ridiculous, to speculate whether or not we will be validating the middle eastern terrorists. Who cares? Are we living to please them, or do we need to satiate the folks here at home? Actually, I think impeachment of Bush would be a wonderful step forward towards improving our relationship with the middle east. I mean, let's be real. This country was ready to impeach Clinton for having a little oral in the Oval Orifice, but we are keeping Bush in place despite the lies and deceptions he has offered up to the American people? I say we ship Bush off to Iraq to find those WMD's all on his own. Banish the fucker. He has destroyed this country and has made an absolute joke of the word "democracy".

It's my fondest wish that Russ Feingold will run for president in 08. I'm lucky enough to have him as my senator currently and would certainly miss that but I think someone with his courage might be able to yank us out of this quagmire we've sunk into. I think he'll be running for sure, it's just a matter of him getting name recognition to get elected. He's a good man.

The "don't criticize us because it helps Al Qaeda" has really been overplayed. Suprisingly enough, it continues to work though.

CP-
concern for what those in the middle east think about American politics and American people is not catering to terrorists as you claim. Terrorist is really not a synonym for Middle Eastern or Muslim descent, despite US propaganda to the contrary...

CRT - That is not what I said. Did you read what ABB wrote?

If Iraq thinks that we are full of shit, calling out of the President for being a crook may make them feel validated. But they probably won’t grow to dig America’s chili simply because we ‘show a united front’ and ‘stand behind the President’.

There are obviously people who ARE concerned about validating the unfounded queries of the middle east.

Incidentally, I sleep with a man from the middle east every night. He's my husband. And while he can be a pain in the ass now and then, I assure you, I know the difference between him and a terrorist.

Damonz - Whew. Someone who got the point! Thank the Lawd!

Did you catch this great companion article in the Chicago Sun-Times where Jesse Jackson joins Russ Feingold's efforts to embolden Democrats?

It's not the heat, it's the timidity
(via Chicago Sun-Times)

Americans are calling for a new direction in large numbers. They are looking for bold leadership -- and bold new policies to deal with the challenges we face. Support for President Bush is near its lowest levels. Support for the Republican Congress is declining below even the Republican base level. Yet there is no lift in this for Democrats -- and that's no surprise. Faced with the epic catastrophe wrought by this administration and this Congress' policies, Democrats have yet to lay out any compelling alternative.
...
None of this is news. But Democrats have, as of yet, been too timid or too divided to do much about it. With America in desperate need of bold leadership and a new direction, their slogan for the 2006 election is, hilariously, "We can do better." Even after conservative Rep. Jack Murtha, the Pentagon's favorite ex-Marine, spoke up, they dance around raindrops on Iraq. They seem unable to offer a coherent alternative to the president's ruinous tax-cut policies. They say nothing collectively about the hole that we're in from the catastrophic trade polices. Even on Katrina, they have failed to provide a clear alternative.
...
But a lot of this is simple cowardice -- the belief that Bush and the Republican Congress have fallen so low and failed so completely, that Democrats can inherit power without ever committing to anything. That is bad politics and bad policy. Democrats who want to run for president are about to learn from core supporters that dancing between raindrops on issues of vital national importance won't get them there.

LOL CP- I stand corrected! ;-) Can you forgive an overworked, overthinking, overreading, Mama?

I didn't realize what part you were responding to..

I have terrible news for Frist. The so-called "enemies of America" (many of them new) are emboldened every time they see how we fuck up any project larger than a book report diorama--from Iraq and Katrina to the latest Medicare debacle.

this bitch has been bitchin about this since the democrats f'd up the 2000 presidential and congressional campaigns. what did we expect when a man who had never spent any real time outside of the US was a serious candidate for president? what did we expect when the class bully/dullard/jock becomes a contender for leader of the free world? and all his little cronies get to come along for the ride...
and 2008 is no better.
makes a bitch wonder when some other country is going to step in and help us with our problems upholding democracy and civil liberties.