Longtime readers know that my older brother Bill is autistic.  My sister and I are co-guardians.  We’ve had that role for years now…and every year has provided raw lessons in the difference between how people talk about social services and how people experience them.  Now that the GOP controlled US House has announced plans to cut food assistance funding, I’m compelled to share a bit of the lessons I’ve learned.

A confession first – I’m more than a bit emotional about this shit.  I adore my brother.  I want the best for him.  I struggle daily with feelings of inadequacy and fear for his long-term wellbeing. So, when Republicans threaten to gut a program that barely meets his needs I feel it…deeply…to the bone.  And I’m having a hard time dealing with callous disregard from a nation my father served in the military and that my parents fought to improve as civil rights activists.

But I’m a co-guardian…this is about my brother’s life…and I don’t get to dwell on my disgust.

All I get to do in this situation is fight.

People on food assistance are people…seniors, the unemployed, the under-employed, disabled people.

If you are an American then someone you know has or is receiving food assistance.

My brother is disabled.

He used to work…but then Missouri Governor Matt Blunt declared war on the poor and passed policy changes while cutting 150,000 people off of Medicaid.  Those policy changes meant that people like my brother who were on Medicaid but also worked would lose coverage if they made over a certain amount in income.

My brother made less than $80 a month working in the kitchen of a fast food restaurant. He loved it…used to wake up at 4am to put on his uniform even though he didn’t start work until noon.  But he had to quit…because in Matt Blunt’s Missouri, adults with autism who make $80 a month and also seek Medicaid coverage are freeloaders addicted to the government’s tit.

It took us 5 years to find a day program to sorta-replace the job my brother loved so much he woke up before dawn to get ready for.  The same “reforms” that cut Medicaid and forced thousands to quit working for fear of losing health care coverage also slashed funding for other social services that provide day programs or volunteer support.

That brings me to the food assistance situation.

A single adult like my brother gets $160 per month in food assistance.  My brother is 42 years old and he has all the nutrition needs of a 42-year-old man.  My father died of a heart attack at the age of 58…we’re working our asses off to make sure my brother doesn’t follow that family tradition.  Bill also has type 2 diabetes that is controlled through diet.

Suffice it to say, $160 per month doesn’t meet his needs.

We haven’t seen an increase in food assistance funds since I became a co-guardian.

Now the Republican controlled House, under the “leadership” of Congressman Ryan, is seeking to cut federal food assistance funding.

My brother currently gets $160 a month in food assistance.

My brother’s birthday was the 5th of July.

We found out about the proposed funding cuts right before we made plans for a family dinner at his house.

I went to the store and spent money I don’t have on ingredients for a meal I know he’ll enjoy.  Eating well is a treat…a rare one for Bill and I know it.  So, I’ll skip a few meals…eat soup or whatever…make it work somehow.

And I really hope he enjoys it.

I hope he can’t see the fear in my eyes and doesn’t notice how stressed out I am.

Well, I'm my brother’s defense.  The only "funding" I get is unconditional love...and that's fueled many a war.

I don’t get to wallow in fear over what may happen to him if his sisters aren’t there to pick up the slack…about how much food he’ll do without ‘cause a Congressman is trying to make a point or whether he’ll end up on the street ‘cause a Senator is having a bad week or if my brother will die young like his father because we didn’t have to means to give him the things he needs to live long.

All I get to do in this situation?

Congress should prepare accordingly.
Posted by Shark-Fu at 9:57 AM 46 comments: 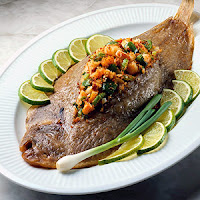 ***logs off with the image of conservatives fighting in the kitchen over how much Emeril Essence to dump on Romney***
Posted by Shark-Fu at 7:57 AM 8 comments: