A bitch is stressed out and grateful for the weekend!

Jumping in because stress makes me incapable of bullshit…

Quizzical #1
Has an alien Geraldo Rivera taken over the body of Paula Zahn? 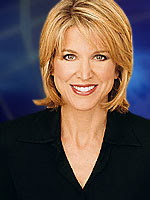 I haven’t seen Geraldo since the beginning of the war. True, I’ve trained all the technology in my house to avoid FOX like the plague…can’t stand coming home to that kind of programming in the TiVo. But one still expects Geraldo to make the news for some asshole stunt yearly. And I can’t remember the last time I saw or heard from his ass.

Anyhoo, Geraldo is missing from a bitch's world…and Paula Zahn has gone from bad to worse on the stunt tip. Race baiting…gay baiting…and now it looks like she intends to bring the rare no matter how much of a big deal the media makes of it crime of women who attack pregnant women for their fetuses out in the open.

If things follow along like the plot of Alien the Geraldo-esque parasite will explode from Paula’s abdomen and make a mad dash for the studio ventilation system.

Talk about brining it all out into the open!

Okay, fuck it... Paula's a grown woman and capable of being a complete asshole without the assistance of the alien Geraldo.

But I like that visual...and you know you do too.

Quizzical #2
Am I the only bitch who doesn’t have a clue how someone cheats at NASCAR and could give a shit that they did?

Is it “I doped myself to win a bike race” bad or “A decade worth of baseball stats are full of shit” bad?

Quizzical #3
Did y’all see this shit?

That’s right, The Queen of Rancidity Ann Coulter and The Pride of Cape Girardeau Rush Limbaugh are joining together…not sexually, mind you…not that they couldn’t join together sexually, what with him having access to lots and lots of Viagra and all…ahem…they have joined together for a FOX comedy show geared to take on my beloved The Daily Show.

The show is set to debut this Sunday on FOX.

The writers of The Daily Show need to light an extra candle to the comedy gods for that blessing of guaranteed material…big time!

Happy Mardi Gras and y’all have a safe and festive weekend…
Posted by Shark-Fu at 2:52 PM

One of the producers, Manny Coto, used to work on Star Trek. I think the Vulcan ritual of Kohlinar requires that we smack him hard upside the head repeatedly until he achieves total logic.

Can Fox do comedy? According to my Magic 8-Ball, "All Signs Point to Oh. Hell. No."

I've seen clips from that Fox show. It's just awful. You would think they could find some actual funny people to write it. And yet...

The title of the show illustrates how much they're straining for comedy. "The 1/2 Hour news Hour" get it? A 1/2 hour isn't an hour! But most national news shows are an hour! But we're not! Oh god, we're so funny! (canned laughter) ahahahaha hahahahaha HAHAHAHAHAkillmeHAHAHA

I love that Gerald-Paula Zahn take. Thanks for a big ol' laugh this morning. I feel your confusion re: NASCAR but then I'm still trying to understand the appeal of billboards going around in circles at 200 miles per hour. You can't read the ads! Also, there's a couple of links to the new Fox Comedy Show rip-off and I'm here to put your mind at ease -- Jon Stewart has nothing to worry about.

OK, I'm pretty sure these are the correct responses (among others) to the quiz.

1) Watch Keith Olbermann instead of Paula Zahn (they are on opposite each other in the 7PM time slot) and Geraldo occasionally pops up as a "Worse Person in the World" recipient. Also, having TiVo set to KO will boost his ratings instead of Zahn.

2) Pouring sugar in the gas tank of other cars, might be cheating, but souping up your car and injecting it with jet engine fuel -- I thought that was the entire point of racing -- to go faster.

3) Why won't the FCC ever fine Fox for obscenity violations? IOKIYAR! I'm pretty sure both Limbaugh and Coulter use Viagra and OxyCandy from Rush's Pez Dispenser.

You should change the name of your site to dumb bitch. You need to start reading Thomas Sowell and quit listening to the white leftist who only feed nonsense to the black bitch.

Thomas Sowell isn't revolutionary, you aren't slick and a bitch sure as shit isn't taking orders.

Wow, someone suggests reading Thomas Sowell? ABB, did you check the domain of the anonymous visitor/commenter? Wasn't the SCOTUS by any chance? I understand Justice Thomas loves Sowell's writings (seriously he does).

I know this sounds like the obvious thing to say...but isn't what Rush and Ann do considered satirical anyway? Or would that be farce? Spoof? Deadpan? No?