Pause…think of Wilbur telling Charlotte to go fuck herself and releasing a plague upon the masses…continue.

Despite my initial concern, people do not catch swine flu from 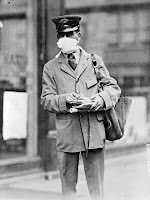 Swine flu is…well, a strain of influenza that used to be a pig problem and is now a people problem. The regular flu kills people every year and this version has been deadly in Mexico, so officials are proactively alerting the public in hopes that folks will take their illish Swine Plague symptoms seriously.

As reported on CNN.com, White House spokesman Robert Gibbs said the outbreak "is of great concern to the White House."

"I would tell people it's certainly not a time to panic."

Word of advice, B-Gibbs - when you tell the masses not to panic we panic. And if people weren’t planning to get their panic on, morning television’s Swine Flu frenzification will take care of

that shit if they have to break out the computer generated path-o-plague map of the world to do it!

Anyhoo, B-Gibbs went on to say...”If you're sick, stay home, get treatment, go see a doctor."

A bitch instantly had a vision of B-Gibbs skipping rocks on a pond!

Of course people should stay home when they are sick…but most people do not for fear of looking undedicated or lost wages. A pattern of illness denial that has only intensified with our current state of fubar economics.

Of course people should seek treatment for illnesses…but doctors and medicine cost money and lots of folks don’t have coverage or extra money.

In Mexico, many of those who have lost their lives to Swine Flu waited until they were very ill to seek medical treatment...and if anyone thinks that couldn't happen here in America is kidding themselves BIG TIME.

Nothing highlights the public health threat to national security that is our lack of a functioning healthcare system like an outbreak of some serious and easily spread shit.

The advice…to wash your hands, cover your mouth when you cough, stay home if ill and be safe rather than sorry by seeing a doctor early.

The reality...people may or may not wash their hands (nasty motherfuckers!), don't cover their mouth when they cough (ugh...NASTY!) and tend to avoid or can not afford safer rather than sorry medical care.

This post reminds me of two places in NYC where public health policy runs slam up against the reality of people's lives.
There are signs all over the subways saying "Feeling Ill? It's Best Not to Get on the Subway." As you write above, staying home or taking a cab is not really an option for most people here.
Also, I work at a large public university. There are big signs in all the bathrooms, not only telling us that we need to wash our hands, but illustrated with pictures of nasty little germs (and what they can do to you) and featuring step-by-step instructions, like so: "Lather your hands with soap. Hold hands under WARM water for at least thirty seconds, washing vigorously." Well that is just great, but do you think we have warm water anywhere? The taps below these signs emit water in a thin, ice-cold trickle.
There is plenty of hand-washing going on here, but not on the part of the public. Once B. Gibbs has told us all that we should stay home, he's done his duty and can go skip rocks with a clear conscience.

Never thought of it that way. We're facing pandemic conditions and both the health care system and the economy are in the shitter. I think I'll just baricade myself in the house and wait this thing out.

Note to self - add supply of Tamiflu to bomb shelter... along with cans of chicken soup and lots of kleenex. Lost count of which seal of the Apocalypse brings pestilence - is it 3 or 4?

Yes, this is a fine example of how badly we need health care reform of some kind. I just happened to be trying to get an appointment to see my primary care doctor this morning, (through the county hospital) and was told that the first regular appointment they had open was in June. So now I'm waiting for a call back with an appointment to see a different doctor. I am not complaining about the care at the county facilities, I literally owe my life to those folks, I sort of love them. They have all they can handle on their plate already, and I am concerned about the county facilities all over- the ones serving large populations as well as they can with the resources they have. If they start seeing large numbers of cases of swine flu, and it looks like they probably will, those people are going to be waiting in ERs and specialty clinics' waiting areas in close quarters for extended periods, and that just seems likely to spread the virus. The hospitals will take steps to avoid this, but I'm concerned that there's only so much you can do with a room full of fifty or so people and their children waiting to be seen for hours. Too bad this stuff isn't already in place, now that it looks like we're really gonna need it. (Stifles long loud rant about spending all those billions on killing people and bailing out criminals while sick folks can't even see their doctors).
-Doug in Oakland

Ok, call me a conspiracy theorist but I do not believe this is swine flu at all. Whenever I hear of some new incredibly fatal thing all of a sudden appearing I become suspicious. Can you say Genocide, Biological Experimentation?

Actually, a lot of people do not wash their hands after they use the loo. I've seen it so many times in men's loos (I hate using male communal bathrooms as I see more about the users' personal habits than I care to know). So the advice is worth giving, although a lot of men (and perhaps women) will ignore it. By the way, people should dry their hands after washing them, as dry conditions are bad for germs.

Everyone has made good points...and I'll admit the first thing that went all alarmist in my head was remembering someone once pontificating about the next terrorist attack coming through Mexico...and it possibly being biological. Didn't I hear this strain was a combo of avian, swine and human strains?

Did you catch the news story showing a soccer stadium in Mexico during a game? The stadium was empty. People there are scared. I'm watching it all very closely.

I work for the media in a city with about 120,000 people. We are corporately-owned. Today, all our markets were notified to purchase surgical masks and to have a solid plan in place. We're being very proactive. The sales/marketing folks have been told to be prepared to work from home if widespread local outbreaks begin to occur.

It's difficult not to get panicky when all this is swirling around you. I remained calm, but inwardly I'm thinking I need to go buy groceries...lots of them. Especially the fixin's for ABB's Corn Casserole Yumminess...with extra cheese and BACON. She approves of my change to her recipe. I digress...especially when bacon is mentioned.

Anyway, long story short. Watch this one carefully. And support Obama. Surely he must be looking up and saying "Really, Lord?"

I had the swine flu shot in the 1970s when there was an outbreak. We also raised pigs. We were poor and Mom carried us to the local health department in rural Mississippi to get our shots. I remember telling her that I wanted to be buried in a blue coffin if I died. Weird thought for a kid to have, huh?

There was a fear then that the vaccination itself could kill you. I am curious if that shot gives me any protection from this virus? I'm guessing not.

All this to say even if this outbreak is stymied, our fear could paralyze us again and freeze our economy any more. This has the possibility to hit us on many fronts...economically, systemically and indeed our very survivability.

Be strong. Be smart. Be aware.

These are exactly the thoughts I had while watching the press conference and I wrote about the sick leave issue over at MOMocrats. MomsRising.org has a petition up on their site to get the government to finally get their rears in gear on mandating sick days in light of this crisis.

I have worked jobs where I would have been fired for taking one (unpaid) week off to be sick. Thank heaven at that time I did not yet have a small child. Just imagine a mother with two or three children, needing time off to care for each of them getting sick in succession, and then needing more time off after she catches the illness herself. How will people without paid sick days, without vacation time, without even unpaid medical leave manage this?

And what on EARTH are low-income families going to do if the schools close?

We are certainly not prepared as a nation to deal with this crisis. And if the illness spreads because sick waitresses, grocery store workers and mall cashiers are not allowed or can't afford to stay home, everyone will be affected.

Those who couldn't be bothered to fix our medical leave law for the past two decades because they didn't think the situation would ever affect them personally may be in for a shock.

As far as handwashing, it's not the warm water as much as it is the soap and the vigorous rubbing of the hands for 30 seconds minimum. Be aware, regular surgical masks are insufficient, you need to get the N95 masks (NIOSH 95) as this type of mask filters very, very small virus particles while the other types do not.

AND so I hear via the news this a.m that the 1st case of the swine flu is traceable 2 a 4 year old boy...and being that it cant be spread via eating swine....and if what the news stated about it spreading from pig to man (boy) via coughing or a pig sneezing directly on you then....just b/c Im a curious mofo...I wonder how the hellz that pig sneezed on that young-en...??? Just saying...

Would be interesting if the news just came out full monty and said what WE all know to be true:

Influenza doesn't need any help from human molecular biologists - this virus has figured out "mix and match" on its own - two different types of flu virus infect same cell, their genomes are floating around in one big soup, and the virus particle just needs one from column A and one from column B to fill its payload - WHICH version of A and WHICH version of B hardly matter to it.