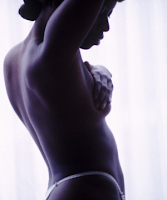 Tis easy to become distracted by the rants from the right attempting to distort the breast health services Planned Parenthood provides.
Let me be clear so that it is forever crystal – Planned Parenthood breast health exams save lives and many of those lives are the women of color those opposed to reproductive justice profess to give a shit about even as they cheer Komen's indefensible move.
Indefensible in the face of the daunting breast cancer mortality numbers black women face.
Indefensible in the face of the reality that Planned Parenthood breast exams filled a gap in the health care system that far too many fell through.
Indefensible in the face of the fact that it is Black History month and we should all be focused on making breast cancer a part of Black “history” instead of creating hurdles that hinder access to care and services.
And indefensible when I consider the 2 percent - the sister who needs someplace to go because she felt something and knows she shouldn’t ignore it but doesn’t even know where to begin…the survivors who barely survived, because women dying due to lack of access to health care is acceptable to those opposed to reproductive justice…and those women who fought like hell, until the very last breath left their body, yet didn’t beat breast cancer because it was diagnosed too fucking late.
Shit.

Pause…collect thyself…continue.
The Komen Race for the Cure in my city of St. Louis is one of the few events that truly unite the city.
Rich, head-above-water, or poor.
LGBT, straight, somewhere on the Kinsey scale, or questioning.

Black or White or Asian or Native America.
Catholic or Jewish or Muslim or Quaker, Atheist, or Pagan.
Thousands of St. Louisans gather together, lace up sneakers or line up wheel-chairs, and walked-run-roll-shuffle...TOGETHER...united for a cure to breast cancer.
I’ve done the walk…I’ve reached the top of that hill to see the sea of people in front of me.
I’ve felt the rush of hope.
This cause deserves better than being dragged into the political muck by conservative operatives.
And the 2 percent…those women who need the breast health services funded by Komen grants and provided by Planned Parenthood…yeah, they deserve better than this as they face the fight Komen lost sight of.


Donate to the Breast Health Fund if you can.

Sign the Open Letter and Stand with Planned Parenthood.
at February 03, 2012

"...broader examination of the charity’s operation and alarming social conservative roots."
So are you saying it would be less "alarming" if the foundation had liberal roots?...and if they have been funding Planned Parenthood for years and years I doubt that they had TOO conservative of roots...maybe they are NOT involved in the political junk that is going on, but, rather, are honestly doing what they say and skipping the middle man...they are giving the funding to the people that actually perform the services....you know, the ones that Planned Parenthood referred these women in need to...the places that ACTUALLY PERFORMED THE TEST....I think that anyone who TRULY cares about the health of women concerning breast cancer would be happier...money straight tot he provider should equate to more money for health and less for administrative needs....you DO care enough about the breast cancer victims that you will not let your pro-abortion sentiment mislead you don't you?....I would hope so....and maybe I am just ignorant, but I know of few women who link Planned Parenthood with mammogram right off the bat...more likely to go to county hospital or free clinic...most of the ladies I hang out with associate Planned Parenthood with reproductive issues of annuals/birth control/ and abortions.

Anonymous - you are separating reproductive health care from women's health care. That doesn't happen in a doctor's exam room. I've had plenty of well woman exams and they include a breast exam. I also know several woman who went to PP specifically for breast exams because PP is their only provider.

I don't see the benefit of cutting women off from breast health screenings, education, and referrals.

And anyone who proposed that women have tons of access to mammography is living in La La land - and under the delusion that women are dying because we keep driving past all those mammography clinics on the way to the movie theatre.

...nor does it benefit the cause to have a branded leader exposed as a political hustler.

A word of advice to "Anonymous" never, ever prech to the crowd and sign yourself "Anonymous". It shows a distinct lack of courage and intestinal fortitude.

And obviously you've never been to a Planned Parenthood since you and the "ladies you hang out with" as you put it, "favor driving past Planned Prenthood in order to go to the county hospital or free clinic." And you all only associate Palnned Parenthood with reproductive issues and abortion.

That's an intersting class of friends you've got there...You'd think out of the whole group of you at least one of you would be better informed.

And heaven forbid, any of you attempt to get educated as to what other vital sevices PP offers...one of the most important being mammograms.

Hell, you might have to slow down and actually stop and inquire about that which you are currently ignorant about. And we can't have that now couild we? That might make you miss your appointment at the free clinic. And you might actually learn something.

Good try, but the kind of post you wrote only works on sites where ignorance and stupidity are the social calling cards of the blind. Namely Fox and other associates of that class. OR classless as I refer to them.

I am a married mother of 7. I used PP in college and the first few years of married life because it fit the budget and the services were good.

And I'm happy to say, PP was the organization that discovered my middle daughter's cancer when she went in for a routine check up in her second year of college.

She and her husband are now the proud parents of two little girls and her cancer has been in remission and she had a fighting chance because they caught it so early.

So you want to preach to the crowd at this blog, you best come better prepared and a damn site more respectful of the role women play in their own healthcare needs.

The idea that "PP doesn't provide mammograms! It only provides references!" is misleading to begin with. This may very well be the case in some clinics (because they can't afford a radiologist...) but the fact of the matter is, most places will not do the mammogram if you don't have some sort of referral. So if you don't have a primary care doc, or can't afford to go anywhere else, it's hugely important just to be able to get that referral from PP where they DO do breast exams as part of a well-woman exam.

I'm glad you and your lady friends are fortunate enough to where PP isn't the only option available for your reproductive healthcare.

I myself am not so fortunate. And more than that, PP has the most professional, nicest staff I have ever encountered in any doctor's office. I've no doubt that HAD they found anything during my check up, they would have done everything in their power to help me find other low-cost resources, and to reassure me.

And more than that - SGK's funding goes only to breast health/cancer preventative services. So the idea that the money isn't going "directly" to the cure is a red hearing.

And really if we're going to talk about "cutting out the middle man" and "money going straight to the provider" let's talk about how much money Komen raises that actually goes in support of their mission. Let's talk about the cheap, toxic products they market, a sad 25% of the proceeds of which only go to "the cause".

Where does the rest of that money go? Their CEO's pockets? To sue other non-profits/companies for daring to use pink? To sue them for using the words "the cure"? To make bogus pink crap to "raise awareness"? Call me silly, but I don't see that as "money straight to the provider" or "cutting out the middle man".

And anyone who TRULY cares about the health of women is not going to laud an organization who's mission is supposedly to promote health, for their decision to yank support for an organization that does just that for the women who cannot afford it otherwise.

I adore you for inspiring every one! You need to get well and I think that you should continue doing this in the future. Thanks for sharing your blog!

I an as sad to read some of your comments on Komen as I am glad tohave found the blog -- through Show Me Progress.

Saddened? Because you show me something that isn't visible here in Brooklyn -- NYC has so many parades, marches, marathons, and general get-togethers that SGK has much less visibility in the crowd. Apparently they can be much more important. And that saddens me because I saw the blogosphere do what it does best, collate information that 'everyone had a piece of.'

And when the jigsaw puzzle of Komen came together, it was not a pretty sight, nor was this the 'oops!' moment it is portrayed as, a non-political organization being pushed into a very bad decision by the unexpected influence of a new hire as VP. Komen was founded by a high official in the GWBush Adminisration, Nancy Brinker. They have always had a board heavy with right-wingers, and have received considerable funding from the Koch Brothers' company, Georgia Pacific.

This is not the first political move they have made, having cut off Universities -- at leasy one, I believe more -- from funding because they were doing stem cell research. I have even seen reliable reports -- which I haven't confirmed -- that they either still have, or until recently did have, a link on their site to articles supporting the non-existent abortion-breast cancer link.

Nor have they 'reversed their decision' but have only said that they will 'preserve PPs eligibility for future grants.' (I could say that Republicans are 'eligible for my future votes' but I've been voting since 1968 and have yet to find any to actually get them.) They have admitted, or implied, at least, that the 'investigation' story was a pretext -- they had to, once it was found that they were still giving funds to Penn State. But they have said nothing about actually giving them future money.

Were this Komen's only problem, perhaps the 'bringing together' would be worth it. But other things turned up, like SGK spending a million of the dollars they collect a year in suing other charities that dare to use '...for the Cure' as part of their name. And the percentage of the money that you give that actually goes for research is about 1/4 but Administrative fees and 'public information' (about breast cancer or about SGK -- in short, 'ads'??) get more.

I wish I could celebrate an 'errant sheep returning to the fold' but it's been much more errant than I had known. Like many commenters -- read the comments on Benen/Maddow's various threads -- I will no longer 'think pink.' Many suggested returning all the pink merchandise around the house to SGK -- some suggested cutting it up first -- with a note why they could no longer give their support.