A bitch caught up on some television viewage this morning (bless you TiVo!!) and …well, the coverage of McCain’s pastor drama made me long to seriously whoop some media-based ass. 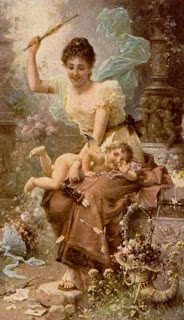 For the love of all that should be balanced, why the fuck is Senator McCain’s double trouble case of Evangelicals behaving badly being treated to such gentle, almost soothing, coverage?

Where for art thou all those video montage segments with the creepy fear inspiring Unsolved Mysteries-esque voice-over featuring non-stop loops of Reverend Hagee preaching about Hitler being sent by God and the Holocaust being the will of God (shudder)?

And what happened to using the taped words of Pastor Rod Parsley as a springboard into a discussion of Evangelical theology and whether Evangelical preachers are teaching hatred and fear of all Muslims from the pulpit…or what the impact of Parsley’s ig’nant absolute statements will be…or whether McCain’s reluctance to denounce him immediately has something to do with Parsley being his spiritual advisor...yeah, all that shit?

How about opening up the Today Show with Parsley on tape indicting all Muslim’s as terrorists (mercy) followed a Matt Lauer on the tall stool interview with self identified Evangelicals where they get asked why they remain loyal to a denomination that preaches hate from the pulpit and how American voters could possibly feel comfortable with the Republican nominee after learning that he actively…with passion, dedication and stalker-esque discipline…sought the endorsement of John 'Catholics are bad but Hitler was a servant of God' Hagee and considers Rod 'bring on the Crusades Part II, baby' Parsley a spiritual advisor/moral compass?

I fear that the Rod of Merciless Correction will need cloning before this election year nonsense is all said and done.

YES YES YES!!! Spare the rod, spoil the 'reporters'. Where is the outrage? Where is the blind fear?
(*curses roundly under her breath)
Why doesn't McCain have to address the nation about this or have his entire campaign grind to a halt?

Because he is white and this is a setup. Didn't you know not all white people get thrown into the "white catagory". In Amrica's eyes there can be different kinds of whites but there can only be one kind of black, latino et all.

Get the rod out. People have lost all semblence of home training (ironic after all these years of family values). Didn't these folks mamas tell them that there are just some things you keep to yourself?

Even better: Why does ABC have an "Exclusive" on the videos when Mother Jones busted that shit out last week?

How about they go ask the nice Jews in Florida who "will never vote for a black man" what they think of Hagee?

and that sounds rotten so let me add, I am Jewish. which is why this shit bothers me so much.

I love the image you found for this post!

I think anonymous above offers a great start on answering your question (which, however, may have been a rhetorical question).

I answered the question in more detail in a recent post, by basically saying that white politicians get a pass on the nastiness of their associates because they're thought of by the white corporate media as individuals first, and as white people second (or rather, third, fourth, or fifth). "Now black folks, though, they all think alike, right?" the thinking goes. "So if Obama's pastor thinks some weird shit, then Obama must think that weird shit too. Right? So step up here and explain yourself Senator Obama. Er, I mean, explain your pastor."

Black Tax is in full effect --- you've gotta work twice as hard to be considered half as good as a White person. And that is the way it will always be so long as we try to achieve pseudo diversity.

I was starting to feel better about our country crawling slowly towards anti-racism but I'm starting to feel discouraged again. I read so many negative comments about the Obamas and they've called them everything short of a "nigger." Obama could be a flawless angel sent from the Lord and his nay-sayers will still say "He's a nigger."

I'm a huge fan of your blog, and in fact was inspired to start my own because of you. I'm inviting you to check out mine, and if you think your readers would enjoy it, add it to your blog roll.

I don't like to toot my own horn, but in my May 6th entry, I did state that Hillary was sticking around because consciously or not, she knows that if Obama is assassinated, she'll be in line for the Presidency by default. Read my unique opinion that I wrote a few hours ago about this. I'm new at this too, so I'd love your feedback, even if it's critical. I can only improve by hearing many opinions.

I also write about other issues. I'm black, an adoptive mother, a social worker, mental health therapist, un-friggin'-employed, and talk about racism in as real and genuine way as I know how. I think you'd like my blog if you have time to read it. So come on by this weekend. I'd be honored.

I have kept mouth shut on the preacher stuff until now, but want to add that if a body wants to buy into everything that comes out of a preacher mouth then he doesn't have much of a mind anyway. I knew one that had been married 3x & he would talk about his last marriage from the 'stand' like she was a dog. News coverage wants people in general to believe association is the evil thing here, not that some preacher/priest need to keep mouths shut & out of politics...but it sells papers...and isn't that what media wants???

It never ceases to amaze me how egotistical jerkwads will take Christ's teachings or those of the bible and turn them inside out so they become a hate-filled diatribe.

I'm all for the Rod of Merciless Correction being used on the creeps in the media who try to make McCain look like any angel but the angel of death.

Kit, I'll believe Clinton is staying in the primary race for nasty motives as soon as Obama's delegate lead is bigger than Jimmy Carter's was at the 1980 Convention. Ted Kennedy was trailing by a thousand delegates, and wasn't villified for splitting the party or doing Reagan's work for him or any of the nasty shit that's being said about Hillary Clinton.

Fact is McCain turned down the endorsement from a man who was not his pastor.

Obama endorsed a man who was his pastor by sitting in his congregation for twenty years.

Oh anonymous, don't let the facts get in the way of your politics.

This isn't about Obama adoration - it is about the curious lack of balance in the manner through which the press chose to frenzy over one case of a pastor behaving badly but took a pass on McCain's pastor drama.

Or maybe you're right and they just assumed from jump that McCain's new found religion was just panderific bullshit...which doesn't sit any better.