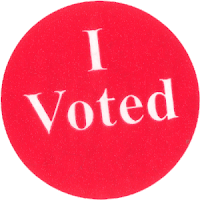 This bitch got my absentee vote on last week!

I’m scheduled to work polls in the county on Election Day, so my city-based self needed to take care of my patriotic duty early!

Longtime readers know that I adore voting but I’d never voted absentee before. I was a wee bit worried that it wouldn’t be the same…that it would lack the emotional rush I get when I vote on Election Day. But as I filled out my ballot the rush was there…the thrill of finally being able to make my choices official and doing so in a crowd of fellow voters…it was fantabulous!

But many of y’all will head to the polls Tuesday November 4th and this bitch wants to make a simple request of you.

With all the frenzified anticipation surrounding the presidential race it is easy to forget that there is a lot of other shit…a lot of very important other shit…on the ballot.

State Senate races, State Rep. races...here in Missouri we have the Governor’s race and the A.G. race, proposals and initiatives...and so forth and so on.

Those of us who have worked our asses off on state campaigns need voters to complete the ballot!

Mmmhmmm, y’all need to commit to finishing it…flip it over and work your way down to the bottom (blink) …COMPLETE IT, DAMN IT!

In the words of the SOS Band…baby we can do it!

Oh Bitch -you hit the nail head once again. We were shocked, when doing voter ID contact this past month, to find out how many Obama supporters (primarily the first-timers) were planning on solely casting a presidential vote, which in a red state can be devastating not only for congressional and local races but for ballot initiatives as well (even for something like the No on 8 in blue CA). Here's hoping that can be rectified before Tuesday.

this is my first time voting (just became a citizen!) and i could not be any more excited!

you hit the nail head once again.ballot initiatives as well .Thank you very much for sharing.
I have read some of your post and I really enjoyed reading it.
http://gwb-chinese.blogspot.com/

I am having an election returns party tomorrow night, and it is a shame you aren't near Louisville because I am serving vodka and grape-cran. A new purple America needs a purple cocktail, not a red or a blue one.

I voted absentee in St. Louis as well because I had been hired to be a election judge in the city and like you found the experience to be just *so* awesome. Sadly, I am no longer needed to be an election judge because they hired too many registered dems. I've already taken the day off of work...any advice? What do you or your readers think would be the best thing to do to help voters on election day?

I really, really want to be able to complete the ballot, but even with as much research as I've done (which is way more this time than ever before), I'm still not sure I've looked up everyone who's running for every office. Here in Indiana, it seems impossible to find exactly what the ballot will contain. I don't want to vote blind, either.

I stood in line in Oklahoma County for 4 hours on Saturday to early vote. I was in line with some of the nicest people, probably 5000 of them. It was the coolest experience.

One suggestion is pack some extra water bottles and sandwiches and hit the lines at voting places to drop them off, to support people waiting to vote so that standing in line to vote becomes a little more like a party than like the DMV.

YES! Vote! Especially you left leaning Missouri folks! You can do it. Here in WV it's a lost cause, which is why I'm leaving for Ohio this evening. . . wifey is alreaqdy there working for super hero son.

(Assuming Missouri works the same as Illinois) you could be a pollwatcher on behalf of your favorite campaign or party, or drive people to the polls. Another idea is to work for the Ballot Integrity Project. Somebody tried to recruit me for the Illinois Chapter just today.

Debby, please make phone calls to voters to make sure they actually voted! GOTV is crucual. You can look up call centers on the Obama website, I'm sure, or call from home.

Shark Fu, I too voted absentee this year since I'll be in PA doing GOTV tomorrow. Alas, I did not feel the same rush I usually do, but expect that to be compensated for when I help other people get to the polls tomorrow! I'll be covering a working class black neighborhood and I'm taking my camera and my smile... history-making is indeed grand :)

I should note that NY has very old-fashioned machines with a lever that you pull, very physical. Of the 6 states I've voted in over the years, NY is by far my favorite cos it feels so real :)

Alas, I did take a photo of my ballot anyway, and I do feel a small thrill whenever I look at it.

Tomorrow is the most important election of my Adult Life.....

If you want to help with getting out the vote, but you aren't sure what you can do; print out some voter protection resources and get them to where people will find them. Libraries, community centers, coffee shops, the main office of an apartment complex, daycare centers, wherever alot of busy people who don' t have the info can get it.

Oh, I want to add that I didn't take the Ballot Integrity Project role only because I'll be working 5:15 a.m. to ??? as an election judge myself tomorrow. In fact it's almost my bedtime already.

I also like said's and glenise's ideas. There's plenty to do!

As a Cali resident..there are MANY propositions that are just as important as who gets elected to lead our nation.

I will be in line when my polling place opens...with camera in hand. ;p

Haven't commented in awhile here, Ms Shark-fu... but have a fan-tas-tic Election Day. Keep the faith and do good work. And to all an Amen.

Thanks to all of you, so much, for your suggestions! I've been all over STL and University City today with bottled water (tiny ones, from costco) and granola bars. Getting a lot of "Oh, thank goodness, God bless you!"

I even convinced some friends in Boston, MA to pony up total of $100 to buy reinforcements when I ran out at 8am.