Sigh.
Shall we?
It seems that the Klan in Missouri had a New Years resolution – to indulge in more public displays of hate.
When news broke that the Klan had papered Sedalia, Missouri I was more interested in the response of residents than the fact that the infamous hate organization was out and about putting leaflets on cars. 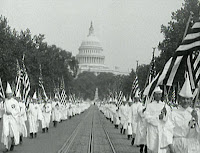 Thankfully many residents were appalled.
Far too many people think the Klan went away after the ‘60s…as if LBJ invented a vaccination for absolute racist bullshit along with his Civil Rights legislation. And way too many people think Klan activities were and are isolated to the South – trust me, most of Missouri still struggles with Civil War themes as if trapped in April 1865.
But now comes news that some asshole has vandalized the sign for the Rosa Parks Highway with…wait for it…the letters “KKK” spray-painted in black.
Pause…sip coffee…continue.
I don’t believe in coincidences...nor am I one to dismiss these public acts as child-based pranks the way some folks do.
No, I see this as textbook Klan behavior.
First the distribution of fliers…which is perfectly legal and protected and if I want the right to do the same shit I need to defend their right too.
Followed by the destruction of [insert something people of color care about or use or recently built or purchased] in an attempt to intimidate, insult, and bully – which makes me wonder if they’re stocking up on wood in preparation for a month of cross burning in February.
***cuts eyes***
Post-racial, my black ass.
at January 20, 2012

This doesn't surprise me, given Missouri's history.

My first thought was a possible response of a Sedalia area resident to the local newspaper: "Dear KKK, Is your flyer safe for septic tanks?"