The Great Cain Train Derailment of 2011…

Happy Monday, y’all!
I was sick as hell all damned day yesterday. I started feeling plague-ish Saturday and it went downhill from there. Ugh. I’m just grateful to feel human again...just in time for Monday.
Yay.
Shit.
Shall we?
Herman Cain has left the building. Over the weekend Cain officially announced that his non-campaign campaign was suspended.

Anyone surprised?
***cue crickets***
Yep.
Now that Cain is semi-gone the remaining candidates for the GOP nomination (Romney, Newt, and a gaggle of anyone but Romney or Newt) are busy trying to gather up Cainiacs and preparing to debate and debate and then debate some more.
I can hardly wait to see who will break free from the herd and indulge in a public display of ‘oh shit, did she or he just do/say that?’ this month week!
Good times.
Pause…sip coffee…continue.
So far the race for the GOP nomination has unfolded like an ice skating competition.
What?
Tis true! 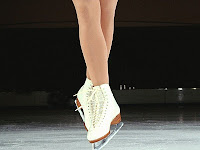 I always end up watching ice skating when it is on television and there is always this huge build-up from analysts about some superstar skater who totally nailed [insert jump here] in practice…followed by lift off…and then a wipe out…and then a reshuffling of the leader board.
Just like the race for the GOP nomination…
...only without the snazzy outfits
Maybe CNN should get Scott Hamilton on staff?
Blink.
at December 05, 2011

...only without the snazzy outfits"

Or any of the talent.

Oh you are funny and wise. Hope you have a nice week.

oh wow. I have this picture of all of them in sequined unitards & nude skates crying over broken shoelaces in the middle of that triple axel & how they need one more chance & it's not their fault if their exes have been clubbing the competition. Thank you for that!

Maybe it would help if they sharpened their blades? Nah, they'd just cut themselves.