Hi y’all!
I found out about a Rutgers student’s invitation to an evening of Disney-based racism through the magic of Twitter.
***rubs palms together*** 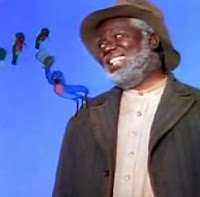 Let’s jump right on in, shall we?
Tis alleged that a white PhD student sent an invitation via email to some of her "Race, Ethnicity and Inequality in Education" classmates (the white ones)…
Wait…hold up!
Am I the only one who finds it confusing that a student interested in that class would send such an invitation?
Maybe she thought the class would be more of a celebration of racism or a gathering of folk who enjoy inequality in education or…oh, fuck it.
Anyhoo…
The student sent the email invitation to her “fellow non-racist racists” for a screening of one of my favorite racist Disney movies to loathe, Song of the South.
Shark-Fu’s thoughts on this shit…
Thought #1 - Could this be an experiment gone wrong?
I know, I know…the fact that the student calls the invited students her “fellow non-racist racists” is damning…and it doesn’t look good that she only sent it to white students.
I was kind of hoping this was a failed attempt at a social experiment…kind of like the blue eye test that Oprah did that show on where folks with blue eyes were treated better than everyone else.
Yeah…um…right.
If that was the case then why the hell hasn’t anyone come out to say that this was an experiment set up to test how the students that received the invitation would respond?
Thought #2 – How the fuck did the students who received the invitation respond?
This is something that fascinates me – when confronted with a oppression-based happening, most people do not respond the way they thought they would, assumed they would, or even hoped they would. In this case, the students who received the invitation didn’t confront the sender and the department has yet to take action.
Soooo…who stepped up?
***cue crickets***
Well, someone had to in order for this to leak…unless the students of color had to overhear that shit in the loo.
Oooooooh, that’s just wrong!
Alrighty then, we’ll move on.
Final Thought – When the class becomes a case study for what the class is about...
I’m betting that this isn’t a social experiment in the classic sense of a professor staging an incident and then calling all parties together for a post-mortem analysis. The loud as hell silence from all parties sans the students who didn’t get invited kind of backs me up on that shit, because an easy way to avoid all this drama would be to announce that the drama inducing ig’nance has a purpose.
No, this looks to be more of an accidental social experiment…the kind that happens every single day in America…the sort that forces us to take our professed values out for a test run and see how they perform. And that casts the lack of outrage, condemnation, and censure from the students who received an email sent to “fellow non-racist racists” in an entirely different light.
Did they laugh?
Did they giggle?
Pause…consider…continue.
Or did they show up with popcorn and beer?
Blink.
at December 15, 2011

Since doctoral diplomas only list the degree of Doctor of Philosophy and not the area of study, this student should be denied her doctorate otherwise it may have been sufficient to award her a doctorate in racism and promotion of bigotry. Needless to say, they all should be given an F for the class and not be allowed to drop it so it will remain on their official transcripts.

What is a "non racist racist"? Oh white people you suck, you really do. Also what Blue said above.

Actually, the linked letter was written by students in the “Race, Ethnicity and Inequality in Education” class; it sounds like the class within which the email was sent was a different class, an English class "dedicated to writings on race between the Civil War and the Harlem Renaissance." The point remains, though, that a person studying that subject matter should damn well know better. Indeed, one might even argue that the class at hand makes it worse, given the extent to which Song of the South is a direct descendant of the virulent racism between the 1860s and 1920s (nostalgia for a time when everyone knew their place, etc etc etc).

I'm wondering if I don't detect a whiff of butthurt about the email, just based on the excerpts provided. Like maybe the Uncle Remus stories came up in class, and people went "oh yeah, that shit's racist as hell--tar baby, what?" and the student who sent the email was shocked and appalled at the aspersions cast on something she had such fond feelings for.

What do you suppose the odds are that a follow-up letter to the editor is coming, in which the student claims it was just a JOKE, and why do we have to take shit so SERIOUSLY, GOD? My guess is that they're pretty damn good.

Hmmm...I really can't give a sound opinion without reading the whole letter. The person who wrote that article is obviously very upset over the letter, but I want to give a doctoral student/instructor of a Race class a little bit of credit...And I just have a LOT of questions. How does the person who wrote the article know the context of the email if they are not in the instructor's class? <<<Just one of my questions. Great post!

To start with, I believe that whomever fostered the notion of a class, topic or whatever about "Race ,Ethnicity, and Inequality in Education" lives in a bubble, and is oblivious to the real world concept, and all that goes with it. I hope I'm wrong, but it reeks of some Ivy League type attempting to burnish their credentials, thereby appearing (to themsellves at least) as very self-aware, non-racist authority on the subject. I tend to agree with iamthelizardqueen that this will be explained away by some superficial lame-ass response, in order to save face. They will continue to "study" the topic in their sterile safe environment, while they live in wanton oblivion, surrounded by the very real problem of racism that still exists in this country.
It would be priceless to see the look on the professor's face if his daughter brought a black man home for Christmas dinner!

why can't we all get along

I wish I had been a lucky recipient of that email.