So, about Romney’s Latino “joke”… 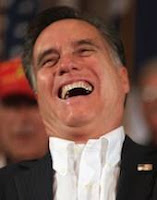 I’ve noticed that the press has dodged addressing some of the other shit Mitt Romney was caught saying to donors, like his attempted joke that he’d have a better shot at winning the presidency as a Latino.

"My dad, as you probably know, was the governor of Michigan and was the head of a car company. But he was born in Mexico ... and had he been born of Mexican parents, I'd have a better shot at winning this. But he was unfortunately born to Americans living in Mexico. He lived there for a number of years. I mean, I say that jokingly, but it would be helpful to be Latino."

Oh, some major news outlets have covered it. Ruben Navarrette Jr. has this post up on CNN.com, so odds are the producers over there have scratched that off of their to-do list.

But most anchors and reporters have opted to clumsily fumble through explanations of who pays income taxes and blah, blah, blah instead of tackling the other gaffe Mitt made that evening in the Hamptons. 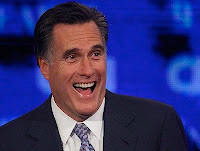 See, the same thing that would have made Mitt’s joke score some laughs (if he hadn’t fucked up the punch line) is the exact same thing that makes anchors and reporters uncertain whether his Latino comments will result in any real political damage.

There is a widely held belief that being a minority has guaranteed advantages for those seeking any sort of advancement.

I’ve personally encountered that shit.  I’ll never forget having an academically challenged friend respond to news that my sister was accepted at Harvard with a “joke” that he should paint his face black and apply too.  Everybody at the table laughed…except me. More than one friendship ended that day. 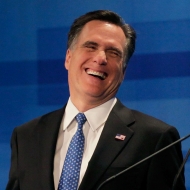 I was disappointed, but not surprised.

Just as I’m disappointed but not at all surprised that so many anchors and reporters have avoided discussing Romney’s Latino “joke”.

If Romney’s callous disregard for the struggles working people face and his boorishly stated belief that 47 percent of us see ourselves as victims are seen as troublesome, then Romney’s crass "joke" about the political benefits to be had simply from being born Latino sure as shit is too.

Naked Girl in a Dress said...

Romney is such a fool, and I just hope enough people recognize it on Election Day. What an ass.

I am pretty sure if George Romney had been born in Mexico to Mexican parents, Mitt would have ended up being the guy who helped me renovate my kitchen... let's all take a reality pill. Mitt is Mitt precisely because of WHERE he was born. And educated. And coddled.

Was this is in the same speech where Romney complained that 47% of Americans "think they are victims." Make that, 47% + 1.

It's rich, indeed, to hear Mitt Romney whining that he is a victim of some imaginary discrimination against rich white men born into the ruling class.

Great argument! Yeah! but oh, wait a minute......who the fuck is President? Oh, that's right - a black man. Any more discussion about what you can and can't achieve because of your race?

Oh, I forgot! Racism ended when Obama was elected.

Um, the only people who believe that are the folk who laugh at "If only I were born Latino" jokes.

And the crickets dont take direction from bullshitters.

Eeeeewww! I read the transcript, and I want to scrub my eyes. I cringe to think of actually listening to the dreck.

Check out Rolling Stone for a series by Matt Taibbi on Romney and Bain. That will really make you ill.

yeah um.. wow. I did see a few Hispanics very conspicuously on display at the RNC ( 'cause believe me, if you were anyone at the Republican National Convention who wasn't a honky, you were getting some screen time).

Mitt seems to have blown whatever lead he had amongst Hispanics, the only minority that was rooting for him. He supposedly appealed to them because of their Catholicism and "conservative values". Well, well, well. I for one won't shed a tear. The Republican Party has sold itself out to appeal to the crazies and has a dangerously outdated brand as it appeals to a shrinking demographic audience of rich, elderly whites. Not only is the Republican Party increasingly rarefied, it's increasingly irrelevant. They just contrast their own little fantasy world..