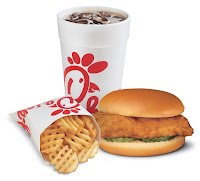 Oh, they aren't just anti-gay or even only concerned with marriage. They're religious authoritarians—theocrats. See, for instance, http://www.dailykos.com/story/2007/07/23/361219/-Dominionism-s-parallel-economy-Pt-2-Dominionism-s-Corporate-Sponsors

It's not just LGBTQ people they have an issue with: http://www.southernstudies.org/2012/08/chick-fil-as-history-of-workplace-discrimination.html

Of the nastiest (in my opinion) organizations they support is Exodus International, one of those "ex-gay" joints. So they don't just oppose gay rights or gay marriage; they support the elimination of gay people.

On Garpu's note: at the CFA by my school, in the middle of Chicago, the great majority of workers, and an even bigger majority of managers, are white. In a city in which the fast food industry employs a very large number of black folks, it makes a bitch wonder. It makes. a bitch. wonder.

Actually, I rather suspect that they "respect" their LGBT customers because they don't want to get sued repeatedly in the less conservative states where they're trying to gain footholds.

Big difference (legally) between espousing blahblah as the company "values" and formally creating policies that use those "values" in ways that are against existing civil rights laws in hiring or so on.

The "right to refuse service" ends where civil rights laws begin -- and though us queers aren't federally protected from much of anything, some of the states (CA, eg) where they're trying to do business do have such protections. So whether the business _actually_ treats anybody, customer or employee, with respect, they have to _say_ they do.

I'm sure they have a whole team of Christian lawyers telling them exactly what they should and should not say here to deal with the lines of anti-discrimination laws.

And I equally "suspect" (know) that the reality of these things is that I'm sure they discriminate like mad, in hiring and customer treatment, because there are about a bazillion ways to appear to follow the letter of the law and still utterly ignore it. I'm sure the employee who just started "living in sin" with her boyfriend or partner or whomever will generally quite suddenly be a poor performer, will be given a terrible schedule that she can't possibly do, and will be fired for being 21 seconds late to her shift. But even if she somehow magically can show a court that they had it in for her based on her marital status (highly unlikely), nobody will be able to legally pin it to the company above her direct franchise owner, because the _big_ boss didn't say to discriminate, just to espouse "values."

Wow Chik-Fil-A could have Michelle Bachman as a spokesperson.