The Great Toilet Exorcism of 2011…

Warning – the following post involves a toilet, a backed up sewer, plumbers, and an exorcism. If you have problems with shit, toilets, or exorcisms…well, this is not the post for you!
Shall we?
Those of you who follow me on Twitter are already aware of the story I’m about to share and how this bitch and a certain C-Money went to war with our downstairs toilet, which had become possessed by a demon…or, as the plumbers prefer to call it, a backed up sewer line.
Pause…shudder…continue.
I took Friday off with the hope of having a fantabulous and rare four-day weekend.  After running errands, I returned home for a relaxing evening with the dawgs.  Around 7pm Friday evening, I went to the loo to do what folks do when they go to the loo…only to have the toilet try to reach out and touch a bitch midway through the doing of the thing I went into the loo to do!
The toilet…we’ll call her Sister Girl Downstairs Toilet…was pissed off and not afraid to show it.  She let forth a fierce gurgle…it got louder and louder…I shot to my feet, bare assed and scared, and turned around just in time to see Sister Girl Downstairs Toilet erupt with a flood of stanky water the likes of which I’ve never seen before and have already informed the gods I never ever EVAH want to see again!
I pulled up my drawers and leapt from the bathroom at the same time, calling out to C-Money to come forth fast. She rounded the corner with a look of horror…and, after a shocked pause, we waded in to stop the flood.
So beganeth The Great Toilet Exorcism of 2011.
Gulp.

Sister Girl Downstairs Toilet erupted several more times Friday night…each eruption-based gushing flood nastier than the next. We quickly determined that running the water elsewhere in the house was connected to the gushes.  I took to Twitter and got lots of advice, eventually narrowing the possibilities down to a backed up sewer line, demonic possession, or a combination of those two options.
We called a plumber and miraculously were able to schedule the exorcism…um, err “appointment” for the next morning.
I had a horrible nightmare that night that involved a gator jumping up through the toilet while I was trying to pee and biting my ass cheek…so, suffice it to say I got less than 2 hours of sleep before Plumber Exorcist #1 (PE#1) arrived and examined the scene.
PE#1… “So, it looks like you’ve got a backed up sewer line. I can snake it and see if that takes care of the blockage.”
Sister Girl Downstairs Toilet … “Gurgle, belch…gurgle, belch…STANK!”
Fu, eyes round with horror… “Yeah, sure, um…whatever, dude…just take care of it, okay?”
PE#1, eager to explain why he needed to snake the line “…because the water is backing up and not getting through which is why…”
Sister Girl Downstairs Toilet… “BELCH, GUGGLE, BELCH…GURGLE…STAAAAAANK!”
Fu, now wild eyed and desperate… “I don’t give a flying shit what you have to do but you do what you need to do to make the shit stop flying out of that motherfucking toilet!!!”

PE#1 had obviously seen this kind of reaction before. He nodded, calmly filled out his paperwork, and went out front to snake our line.
Meanwhile, C-Money was busy looking up exploding toilets on the Internets. Every half-hour or so she’d pipe up with examples of how this eruption drama could be worse.
C-Money… “Some dude in Texas had a toilet explode on him and pin him to a wall!”
Fu… “Fuck you.”
Sister Girl Downstairs Toilet… “Gurgle, belch!”
Plumber Exorcist #1 came back in. He’d snaked the line twice but the demon wasn’t letting go.
It was time to send for another exorcist with a power hose to flush the line.
Sister Girl Downstairs Toilet, apparently aware that she’d bested the first plumber, proudly gushed some more sewer water and then fell silent.
Two hours passed…and then Plumber Exorcist #2 came to the house.
***cue the music***
He entered like a veteran toilet exorcist.
We began to tell him what was what about the multiple things the toilet was doing and that there were likely several demons within…but he cut us off. 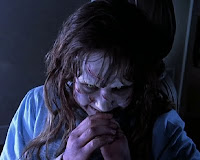 “SILENCE! There is only one demon. Let me see the toilet now.”
We backed away as Plumber Exorcist #2 approached the beast.
Sister Girl Toilet belched and groaned.
The Plumber Exorcist nodded and turned away.
“Show me the basement.”
You bet your happy ass I did!
He was down there for a while…an ungodly stank rose from the vents...the house shook and I heard what sounded like an ocean flowing in the basement.
I’m pretty sure I heard Plumber Exorcist #2 chanting.
“The power of a flushed out main sewer line compels you! The power of water clearing a path for more water through the pipe compels you!”
The toilet gasped…gurgled and belched…and then fell silent.
A hush fell over the house.
After confirming that we could once again run water in the upstairs bath without inviting the sewer in to our downstairs bathroom, Plumber Exorcist #2 took his leave.
C-Money and I turned to look at each other and then leveled out shock-glazed eyes at the downstairs toilet…from a safe distance, because we no longer trust that bitch. 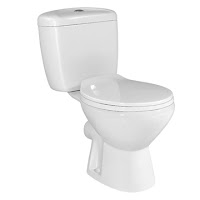 “No way in hell am I EVER using that toilet again.” C-Money said in a flat exhausted voice.
I nodded.
“No way in fucking hell.”
So endeth the toilet exorcism.
Blink.
at September 06, 2011

You sure do know how to tell a story!

That is the best telling of a toilet/sewer story I have ever heard! I was laughing and commiserating with you out loud. I hope that you have been freed forever from the possession and never need another exorcism!

I have never met you, have never exchanged email or phone calls with you, and have never read your blog before today.

However, we are now Sisters of Sewage Victimization. If you called me at 3am screaming, "IT'S ME AND IT'S POSSESSED AGAIN!!!" I would console you as best I could. I would tell you sneaky ways to shower without alerting the Evil One of Porcelain. I would mail you a baked good the next day.

M'dear poor, plumbing-challenged sista woman....my heart goes out to you whilst I laugh my brown ass off!

No, angry toilets are not funny, but your story-telling abilities certainly are. ;-)

Try walking into your downstairs apt and the first step you take goes..squish. Therein lies another tale of horror and woe, as my bathroom was at the back of said apartment. Oh, the agony, the stank..the expense!

I have neither read nor heard a telling of toilet possession like this! I will never again look at my toilet the same way :) Thankfully the problem was taken care of, and I hope it never happens again!

Hi Shark Fu. Ironically the comment/moderator word thingy to verify is something like "dumps". I feel your pain. I have Irritable Bowel Syndrome and the toilet in my new apartment was so inadequate last year that it caused a GIGANTIC backup of similar proportions. I finally installed a whole new toilet, which was cheaper than repairs would have been. HUGS!!

I was scared as I was reading this post but overall it's great. It provide an amazing unique idea.